Javed Miandad ran towards Imran Khan, grabbed him by his arm and pulled him for a hug. “Only Miandad can do that to Khan sahab”, said my dad.

The hug was iconic; not because even in absolute ecstasy of winning the World Cup no one else actually had the guts to hug Imran Khan, let alone have the audacity to pull him by his arm. It was momentous because the glory, the jubilation, the tears, the triumph, the prostrations and everything that Pakistan cricket was experiencing that day, in fact, everything that it had in the previous decade had its centre of gravity in these two individuals.

During the 80’s, Pakistanis got accustomed to the ways of this extraordinary duo. They moulded and inspired an entire generation of cricketers, oozing confidence and giving birth to absolute match winners.

We saw Imran lift the trophy and bow out of cricket with all the grace and glamour the sport offered at the time.

However, even with the abundance of skill Imran left behind, few could have envisioned that Pakistan cricket had already peaked. Scattered moments of sublime brilliance were to be surrounded by dark times that lay ahead.

Out of the men Imran skippered, nine went on and became Test captains. Javed Miandad, Wasim Akram, Saleem Malik, Waqar Younis, Ramiz Raja, Aamir Sohail, Saeed Anwar, Moin Khan and Inzamam ul Haq, all got a shot. Many had multiple stints. Often, at the expense of their teammates, and usually through an unpleasant transfer of power.

2010 brought 35-year-old Misbah-ul-Haq, the most un-Pakistani cricketer and an even more unlikely national captain, a complete antithesis of Imran Khan and his prodigies.

His first assignment as captain was a series against South Africa. Dubai International Cricket stadium was hosting its first Test match as team Misbah laid foundations to their fortress.

South Africa set a 451 run fourth inning target for Pakistan, who were bundled for 248 in the first innings. With four sessions to go, a Pakistan loss seemed inevitable.

Then, Mis|You (Misbah-ul-Haq and Younis Khan) came together and provided what would be a template for Pakistan cricket for the next seven years. They refused to lose. Misbah batted 225 minutes and Younis Khan for 344 minutes. Both remained not out.

Younis, the man of the match, was making a come back after a one and a half year altercation (ban, retirement, fine, no one was quite sure, including Younis himself) with the administration and teammates.

Finally, Younis had a captain who gave him the liberty and respect he demanded, and a man Younis could respect and admire in return.

Mis|You went onto score 3,213 runs in partnership at an average of 68,36 – the highest by any Pakistani pair in Test history. They got a century stand 15 times, that puts them sixth in the all time list and makes them the only Pakistanis in the top 20.

Rahul Dravid and Sachin Tendulkar lead with twenty 100+ partnerships. But Mis|You were more than twice as likely to get a century partnership than the Indian legends.

https://e.infogr.am/most_hundred_run_partnerships?src=embed
Most Hundred Run Partnerships
Create your own infographics

2017, Roseau Dominca, it was the final Test against West Indies with the series on the line, with history on the line. With how Misbah was going to be remembered by many, especially by countrymen who disagree with his ways.

My generation was raised with Imran’s style of play; we go weak in the knees for tare away fast bowlers and aggressive batsmen. We crave the flare and flamboyance the Pakistani teams have been associated with. Thus for many in Pakistan, Misbah’s gameplay has never hit the right chords.

Day 5, West Indies is 76/5 chasing 304 on a crumbling pitch. Amir is bowling and has one wide slip, gully and cover point. He has more men saving runs than he has men in catching positions. This ought to be a joke that a lot of Pakistanis don’t see the funny side of. A little later Ramiz Raja comments that this is a field someone would set with the scorecard at 300/3 on Day 2.

I get more messages asking why isn’t Misbah attacking? Again, I have no answer. I never truly have, but Misbah’s Test match results say, it has hardly ever mattered.

Roston Chase and the West Indian tail fight bravely and take the game to the wire.

I get another message from a friend. “Is there a chance or will Chase become Jimmy Adams?” Pakistan fumbles chances and close decisions go against them, 17-year-old wounds seem fresh again.

Second last over of the day and the same friend messages “Mis|You have clean intentions, maybe there will be a miracle.”

I am praying, so are millions of Pakistanis. But this prayer is not just for our country’s win; it is for the two men who have served Pakistan cricket more selflessly than anyone in a very long time.

10 men fit the frame around the bat as Yasir Shah wins the game. There are celebrations; Misbah hugs his teammates one by one, and then its time to hug Younis. It is the camaraderie of many years, one of highs and lows. And the hug is longer than any other that evening.

It reminded me of Javed and Imran at the MCG in 1992. In Pakistan, no one before, or since, had retired in such style, in any style.

The two duos belong to different eras and cannot truly be compared.

But if Imran and Javed instilled flash and fortitude in Pakistan cricket, Misbah and Younis showed the path of resilience and resolve.

While Imran and Javed were cocky and combative, Misbah and Younis were cool, calm and collected.

Misbah ended up with almost twice more wins than Imran as captain, and Younis with more hundreds than Javed and Imran combined.

Their numbers are staggering, but it is not what defines them, it is not their legacy. To judge what MIS|YOU have done for Pakistan cricket through numbers is like gauging a Rolls Royce by its speed.

A V12 with 500 horses can go fast at will, but it’s the RR suspension that goes over ditches like it is on water. Only those who understand its beauty can appreciate the comfort, class and grace of its ride.

And if anyone doubts the power behind these engines, Misbah holds the record of the maximum number of sixes hit by any Pakistani batsman ever, 81. And Younis is number two with 70 sixes. No one else even touches 60.

But how do you weigh the respect that Mis|You earned back for Pakistan on English soil?

How do you measure the worth of dignity and honour they brought for Pakistan cricket?

They showed that a bunch of corrupt and divided match winners can win the odd game or two on their own, but it takes a well-knit team to become the world’s number one. When unity, faith and discipline meets hard work, it can create its own magic.

How can you quantify integrity? Especially in a place where it has been so scarce!

How can Mis|You ever be replaced?

I have the answer to that.

Who do you think would be able to replace Misbah and Younis? Are you a cricketing enthusiast, player, or trainer? Share your thoughts at blog@dawn.com 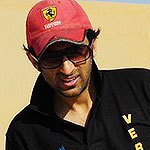 Shaan Agha grew up in a home with sports as its religion and “The Cricketer” subscription of black and white pages as holy script.

He resides in Istanbul and can be reached here.