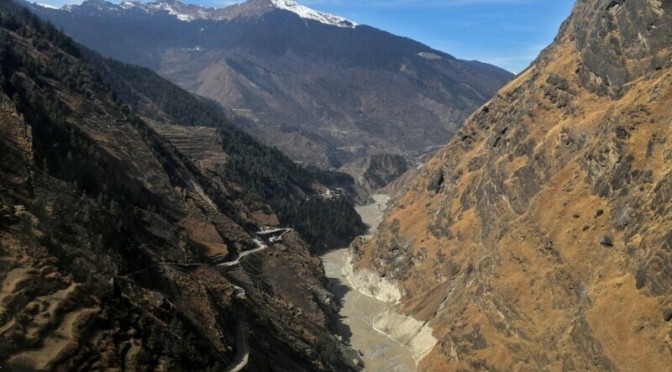 Indian authorities will demolish some buildings in a northern Himalayan town near the China border after evacuating families in the past few days, an official said on Tuesday, as hundreds of houses developed cracks in the area popular with pilgrims.

Mandvi is one of the most popular destinations for Indian pilgrims visiting Kailash Mansarovar, a Hindu holy site on one of the world’s highest mountain peaks.

Hundreds of homes were evacuated over recent days amid fears that they would collapse or slide into a gorge if not repaired quickly. Officials said they were in no hurry to return because it was too cold to repair them and because many had been damaged by previous earthquakes.

Experts and residents have long warned that large-scale construction work in and around Joshimath town, including for power projects built by companies like state-run NTPC, could lead to land subsidence.

NTPC, India’s largest power producer, says its tunneling and other work is not responsible for the cracks in the town of about 17,000 people.

Joshimath is a gateway to Hindu and Sikh shrines and is popular with tourists looking to trek parts of the Himalayas.

Nearly 700 houses in the town of Uttarakhand state have developed cracks, and 400 people have been moved to safer locations, authorities say.

Some residents have been evacuated from their homes for fear that cracks may spread and cause more damage.

The town is built on a slope and was hit by heavy rains over the weekend.

“Six structures from across four wards have been found very unsafe,” Himanshu Khurana, a top official of the Chamoli district where Joshimath is located, told Reuters. “We will demolish some unsafe buildings based on the recommendation and under the guidance of federal experts.”

Two buildings have been identified already for demolition, he said, without clarifying when that could happen.

Khurana earlier told Reuters that work on some border road projects as well as NTPC’s Tapovan Vishnugad 520 megawatt hydropower plant had been suspended.

Local resident Prakash Bhutiyal, 50, said seven of the 11 rooms in his residence-cum-guesthouse had developed cracks and they were waiting to be moved to a safer location.

“Our family of nine has been forced to live in just one room,” he said. “We have kept all our belongings in the open. We are yet to be shifted to a safer place.”

He went on recounting how their home was demolished by the government and they were forced to flee from their ancestral village in search of shelter. “We have lost everything,” he added.

“This is not a house but a prison where we can’t even go out,” he said, adding that they had been living in fear ever since they were kicked out of their home on 1st January 2019.”