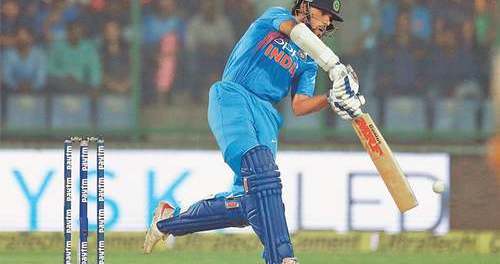 The hosts capitalised on a blistering start to post a commanding 202-3 before restricting New Zealand to 149-8 to go 1-0 up in the three-match series.

Left-arm paceman Nehra, 38, ended his international career at his home ground nearly 18 years after his 1999 Test debut against Sri Lanka.

Put into bat by a New Zealand side wary of the dew factor, the hosts got off to a flying start with openers Shikhar Dhawan and Rohit Sharma featuring in India’s highest Twenty20 partnership.

The left-right duo toyed with the Kiwi attack to plunder 158 runs for the first wicket, aided by sloppy catching by a New Zealand side usually renowned for their high fielding standards.

Dropped on eight by Mitchell Santner at point, Dhawan smashed 80 off 52 balls, hitting two sixes and 10 boundaries in his scintillating knock.

Virat Kohli (26 not out) also got a reprieve when Martin Guptill floored a catch in the deep and the India captain smacked three sixes in his 11-ball cameo.

Leg-spinner Ish Sodhi dismissed Dhawan and Hardik Pandya in the same over but could not stop India passing 200.

New Zealand lost both openers inside four overs with Pandya sprinting from long-off and diving full length to take a stunning catch near the sightscreen to dismiss Guptill.

Tom Latham top-scored with 39 and Santner made 27 not out but New Zealand never really got going.