“Is Bosnia dangerous? Isn’t there like a war going on there?” Our Bosnian guide frustratingly recounts the questions he is frequently asked when travelling overseas.

“We need another Olympic games to balance things out,” he humorously says.

Sarajevo is an increasingly vibrant place again with a growing number of tourists each year. Rich in history and natural beauty, the country is relatively cheap to travel across by European standards.

Sarajevo is made up of two words, ‘saray’ and ‘evo’: ‘saray’ comes from the Turkish word for palace and ‘evo’ is believed to be a Slavic derivative of the Turkish word ‘ova’ or ‘ovasi’ meaning field or valley.

The city is built inside a valley and is surrounded by the Dinaric Alps mountain range with green hills and beautiful houses with red roofs and white walls, minarets, church towers, forts, mansions and graveyards donned across it.

Walking through the streets of Sarajevo’s old town with its wooden-built Ottoman-style bazaar and smell of kebab and grilled meat being cooked, I can see that Sarajevans, despite the rise of huge shopping complexes, still retain a love for the traditional markets. Families, couples, friends and colleagues alongside tourists relax in tea houses, smoking nargila (water pipe).

Bars, pubs and nightclubs are blended in throughout the city; a tall woman wearing a hijab walks alongside her uncovered blonde-haired sister who is wearing a dress. The city still embraces its multicultural heritage, although as our guide, who has a Serbian father and a Bosniak mother, tells us – it’s not like it used to be. “Mixed marriages used to be very common in this city,” he recalls.

Bosnia was a part of Yugoslavia, which encompassed present day Macedonia, Slovenia, Bosnia and Herzegovina, Croatia, Kosovo, Serbia, and Montenegro.

The war drastically changed the demographics of the entire region. Today, Sarajevo’s population is 80.7% Bosniak, 3.7% Serb, 4.9% Croat and 10% others.

Sarajevo’s streets are littered with reminders of the war and a sense of macabre is undeniably present throughout the city. One typical mini memorial I kept coming across is the red roses of Sarajevo. Every other street has a section of the pavement that looks damaged, but upon getting closer, I realised that the damaged pavement is painted red and forms a rose-like shape.

A Sarajevan explained to me that “these damaged parts of the pavement are where artillery landed and killed someone during the war. Rather than forgetting our past, we want to remember each and every individual tragedy, each life lost. We painted a red rose as a sign of love and peace. Because this is not an official memorial, the roses sometimes disappear. If the government decides to redevelop the street, people get angry about it.”

Cemeteries play an important role within Sarajevan culture; the city has integrated graveyard space into its everyday social life. I went to a few graveyards and saw people having picnics. A local explained to me that “Bosnian Muslims have always had a very open attitude to death. It’s a part of life. Why hide away from it? Why shouldn’t graveyards also be public parks?”

Sarajevans love life. Huge developments across the city, which not only include new shopping centres but also restoration of historic sites, opening of galleries and museums, give a clear impression of a place moving on.

Hikers and trekkers will be in heaven in Sarajevo; I walked up a steep hill and reached the yellow fortress, where I saw many young and old relaxing and enjoying the stunning views of the city at sunset.

There is no shortage of places to visit, hills to hike or adventures to be had in the city. Getting lost is not an issue; the locals are warm and friendly and are willing to help you find your way. I should warn you that food portions are large here; a little salad is a mini feast. But if Sarajevo doesn’t win you over, surely Mostar will.

A two and a half hour drive from Sarajevo to Mostar has to be among the most beautiful and stunning rides of my life. Green and lush valleys, snow-peaked mountain tops, clear river, mini mosques and churches in tiny villages – it could be the description of paradise itself.

Once you enter Mostar, the city does not disappoint with its old stone streets, vibrant market place and tasty food. Undoubtedly, the main attraction is Stari Most, a 16th-century Ottoman bridge which is aesthetically pleasing but difficult to walk across. Also known as the Old Bridge, it was destroyed during the Croat–Bosniak War 427 years after it was built. It was finally rebuilt in 2004. It is a hump-back bridge; it goes up, stabilises in the middle, before going down again.

Locals look amused as tourists struggle to cross the bridge and some even hold onto the railings while crossing. It took repeated attempts before I could confidently cross it.

One local man climbed to the ledge of the bridge. As a crowd gathered, he worked them up, and when enough people had gathered, he jumped off the bridge and landed safely into the crystal-clear waters below.

From Mostar, it is easy to travel to anywhere in southern Bosnia. There are numerous towns, villages, cities, historical sites and nature reserves to visit.

A must-see is the Kravice Falls, 40 minutes away by car. The beautiful waterfalls are an ideal spot to go for a swim, take photographs, relax and eat Cevapi or grilled kebab in bread. Even on a hot day, being close to the water will keep you cool as you listen to the sounds of crashing water.

Coming to Bosnia and Herzegovina is an unforgettable experience. For many, the word ‘Europe’ conjures up images of Paris, London or Berlin, but the so-called ‘other Europe’ is as important to the identity of modern Europe.

Despite its troubled past, the importance of Bosnia – especially at a time when reductionist identity politics is sweeping the Old Continent – is about demonstrating the multiethnic and multifaceted of Europe’s past, present and future.

Beyond the history and political lessons that can be learnt in Bosnia, it is also a cool place to enjoy good food, great sights and warm people. The place is really opening up to tourists and it deserves to be on your travel checklist.

All photos by the writer. 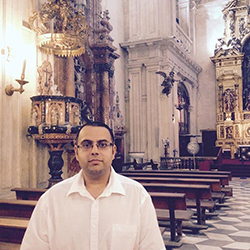 Usman Butt is London-based freelance multimedia journalist and media researcher who has written for The Huffington Post, Muftah, and others. He has also researched and produced documentaries and television features for The Community Channel (UK), the BBC, and a variety of television production companies. He enjoys travelling and plans to visit every continent before turning boring. As Blaise Pascal once wrote, “All our dignity lies in thought…Let us labor, then, to think well.” This is the philosophy he lives by.