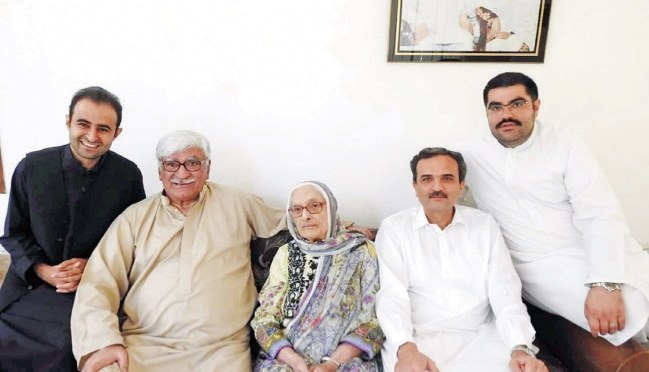 Naseem Wali Khan, widow of late Abdul Wali Khan, announced to merge her faction Awami National Party-Wali (ANP-W) into ANP after she set aside her difference with ANP central president and her stepson Asfandyar Wali Khan.

The announcement was made at Wali Bagh here on Tuesday during a meeting that was also attended by their family members Aimal Wali Khan, Lawangeen Khan and a large number of party workers.

Few years ago, Begum Naseem Wali Khan, who had already tense relationship with Asfandyar Wali Khan, developed differences with the ANP leadership owing to political reasons that resulted in her parting ways with the party and formation of ANP-W.

Mr Hoti, who is also provincial president of ANP, had been making efforts to remove the differences between the two senior leaders, who were also his close relatives. Finally, the two leaders set aside their differences and announced at their residence during a ceremony to work jointly from the platform of ANP.

Both the leaders announced to follow one manifesto and strive to spread message of Bacha Khan.

Khan Abdul Ghaffar Khan, commonly known as Bacha Khan, the founder of Khudai Khidmatgar Movement before partition, who spread the message of non-violence among Pakhtuns used to visit the hujras of people to remove differences among them.

The two important members of the family of Bacha Khan also finally decided to forget their differences and work under the same banner for the rights of Pakhtuns.

The Indian Charge d’Affaires (Cd’A) in Islamabad was called to the Ministry of Foreign Affairs today and conveyed Government of Pakistan’s unequivocal rejection of India’s illegal and unilateral actions of 5 August 2019 in Indian Illegally Occupied Jammu & Kashmir (IIOJK), which breached international law, UN Charter and the 4th Geneva Convention as well as … END_OF_DOCUMENT_TOKEN_TO_BE_REPLACED

Al Qaeda leader Ayman al-Zawahiri was killed in a US strike in Afghanistan over the weekend, American President Joe Biden said on Monday. Zawahiri, an Egyptian surgeon who had a $25 million bounty on his head, helped coordinate the Sept 11, 2001, attacks that killed nearly 3,000 people. US officials, speaking on the condition of … END_OF_DOCUMENT_TOKEN_TO_BE_REPLACED

WASHINGTON: Former US president Donald Trump returned to the US capital this week and delivered a speech that’s being interpreted as his first for the 2024 election campaign. “As Trump speaks in Washington, his allies prepare for a second term,” The Washington Post reported. “Trump supporters are already working on a government-in-waiting if he wins re-election in … END_OF_DOCUMENT_TOKEN_TO_BE_REPLACED