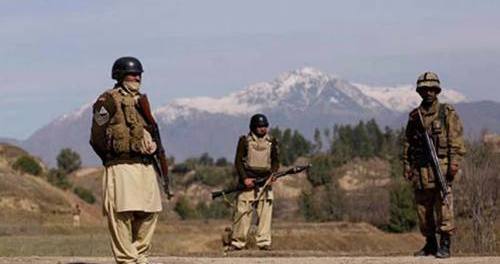 Two personnel of the Frontier Constabulary (FC) were killed when suspected militants from across the Pakistan-Afghan border reportedly attempted to attack a checkpost in Khyber Agency early Friday, DawnNews reported while quoting the military’s media wing.

Pakistani troops “effectively responded”, as a result of which six militants were killed during the exchange of fire, the Inter-Services Public Relations (ISPR) was quoted as saying.

Earlier this month, five soldiers of the Pakistan Army had lost their lives in a cross-border “terrorist attack” on three Pakistani border posts along the Pak-Afghan border area. The Pakistan Army reportedly killed over 15 suspected terrorists in their retaliatory action at the time.

The latest incident comes at a time when Pakistan and Afghanistan have reported incremental progress during their talks in London following the latest impasse in their relationship over terrorist sanctuaries.

The two sides have agreed to take “tangible” confidence building measures related to each other’s concerns.

The dialogue in London was focused on mutual concerns about existence of terrorist sanctuaries on each other’s soil. Soon after the bombing of Lal Shahbaz Qalandar’s shrine, the Pakistan Army had handed over a list of wanted 76 TTP and Jamaat-ul-Ahrar (JuA) terror suspects living in hideouts along the Pakistan-Afghan border to Kabul.

Afghanistan then responded by sending a list of 85 Taliban and Haqqani network ‘commanders’, allegedly residing in Pakistan and linked any action against TTP and JuA terrorists to “verifiable action” by Pakistan.

After last month’s wave of terrorism across the country, the army closed the border crossings at Torkham in Khyber Agency, Kharlachi in Kurram Agency, Angoor Adda and Ghulam Khan in South and North Waziristan and Chaman in Balochistan.

The army made redeployment to seal the Afghan border, attacked militant hideouts and also launched operation Raddul Fasaad in urban areas of Punjab and rest of the country to eliminate terrorists and their facilitators.

It reportedly pounded with shells a training camp of Jamaatul Ahrar, which had also claimed responsibility for suicide bomb attacks on Feb 13 and Feb 15 in Lahore and Mohmand Agency.