TAXILA: A police officer in Hassanabdal has made a video where he threatens to shoot himself in protest because he has been denied a promotion for 24 years. The video has since gone viral on social media.

In the 2 minute 39 second video, head constable Mohammad Afzal, who is deployed at the Police Chowki Burhan, which is under the administrative control of the Hassanabdal police station, recites verses from the Holy Quran and then puts forward his demands to Regional Police Officer (RPO) Fakhar Sultan Raja and District Police Officer (DPO) Zahid Nawaz Marwat.

He says he cleared the lower courts’ C-1 departmental exam 24 years ago but has been denied a promotion.

He says he was not given a promotion even though a court order was made to the effect and asks why he was not paid his dues by the pay department despite orders from the DPO.

He threatened to shoot himself if he is treated like Constable Deen Mohammad, who committed suicide at the CIA headquarters in Rawalpindi with an official gun. He says he is aware of the consequences he will have to face after posting the video and that he is ready to face any departmental action.

When asked, DPO Marwat said Constable Afzal joined the police force in 1987 and was twice removed from service.

The first was in the year 2000 when he was involved in an attempted murder case and was dismissed from service when found guilty.

He was also sent on compulsory retirement in 2011 when some criminals had escaped from his custody in the Rango police station. The DPO said Constable Afzal had appealed to the Punjab Service Tribunal and after he was reinstated, the intervening period was declared leave, which is of around nine years.

The DPO said there are no provisions in the rules for granting such a long leave.

Mr Afzal then went to the Supreme Court on April 19, 2016 and the matter became sub judice, the DPO said, adding that the police department is now waiting for SC orders.

ISLAMABAD: Police officials have been warned to avoid the practice of taking choice postings or using their connections for this purpose.

Officials found involved in the practice as well as those who accept any recommendation from influential people for choice transfer/posting of police officials would be facing disciplinary action.

A circular issued from the Central Police Office Islamabad stated: “It has been observed with great concern that the senior officers of ICT police manage their own choice posting by violating government instructions issued from time to time and government servants (conduct) rules 1964. Backdoor channels are also used for the choice posting without prior permission of the inspector general of police.”

It added that a serious notice of this insubordination had been taken and the officials were directed that the undesirable practice was contrary to the rules and, therefore, should be stopped forthwith.

“All the senior officers of ICT police are, therefore, directed to follow the instructions contained in the Government Servants (conduct) Rules 1964 in letter and spirit.” In case of violation, disciplinary action will be recommended to the competent authority against the delinquent officers under intimation to the Establishment Division.

On the other hand, police officers privately say giving choice posting to the blue-eyed boys still continued in the police. Though the minister never intervened in the matter, some senior police officers were involved in the practice either for themselves or entertained recommendations from influential people.

Earlier, Chief Commissioner Islamabad Zulfiqar Haider had sought an explanation from IGP Tariq Masood Yasin for posting two officers as the assistant inspector general of the police and the superintendent of police Saddar without his permission or bringing the matter into his knowledge, the officials stated.

Interestingly, Mr Alam joined the capital police last year when he was serving as the SSP but was given the charge of DIG operation in violation of the rules, the officials stated. SSP Waqar Chohan was also promoted to the DIG rank but an excuse was made only in the case of Mr Alam, they added. 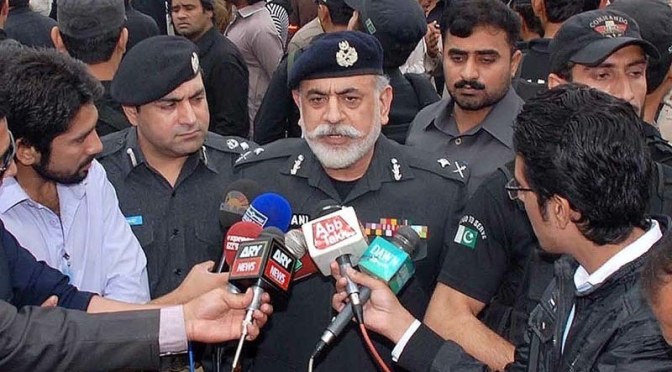 Khyber Pakhtunkhwa’s police chief Nasir Khan Durrani on Thursday relinquished charge as the inspector general of police after serving at the post for more than three years.

Durrani assumed the office of inspector general in 2013. His appointment came a day after twin blasts at a church in Peshawar which killed left 81 people and injured more than 100.

According to a document DawnNews had obtained in September 2015, some 4,934 police officials were either removed from service or awarded other punishments on disciplinary grounds.

Durrani also introduced a Police Access System to address public complaints within the shortest possible time. He also introduced the I-Call system, establishing a round-the-clock direct link between himself and the public.

Additional Inspector General Syed Akhtar Ali Shah is the acting IGP until an official announcement is made.

British Home Secretary Amber Rudd would visit Pakistan next week, he said, adding that some issues effecting the two countries’ relations would be raised during her visit. He was confident that help would not be denied as Pakistan was helping the UK out on several similar cases.

He said the MQM-London had not only targeted the country’s laws, but also the state itself. “We had raised these issues with the United Kingdom in the past and will continue to do so,” he said.

The minister confirmed that the name of the PIA chief executive officer had been placed on the Exit Control List over corruption charges. He said FIA’s initial report on irregularities in PIA revealed that the national flag career got plane on wet lease at a rate of $8,000 per hour, while a private airline got the same at $4,000 per hour.

On the crackdown on blasphemous content on social media, Mr Nisar said the government was ready to go to any lengths to curb it.

Describing those responsible for circulating blasphemous content on social media as enemies of humanity, he said the government would decide whether to keep social media websites, including Facebook and Twitter, open in the next three to four days.

He said that if there were no signs of cooperation from the two websites during these days, a roadmap was ready. Those responsible for uploading objectionable material in Pakistan could be traced by the PTA, but if it was happening abroad, the government would need those websites to cooperate with it, he said.

The minister said the FIA had shortlisted 11 Pakistanis who were involved in chatting on blasphemous posts. They would be summoned for interrogation, he added.

ISLAMABAD/LONDON: Pakistan and Afghanistan on Thursday reported incremental progress during their overnight talks in London following the latest impasse in their relationship over terrorist sanctuaries, hinting that the dialogue process may continue.

There was, however, no immediate breakthrough on the most pressing issue: reopening of border crossings that Pakistan shut after last month’s spike in terrorist attacks, blamed on terrorists with sanctuaries on Afghan soil.

Sources in the Pakistani High Commission described Wednesday’s interaction as “positive, productive and held in a cordial atmosphere”. They said Pakistan had raised the issue of Afghan-based groups involved in terrorist activities in the country, such as the recent attacks in Lahore and Sehwan.

Mr Aziz and Mr Atmar had been talking to each other over the telephone earlier as well to defuse tensions and explore prospects of cooperation against terrorism. These chats, however, had failed to break the impasse. Both sides met again on Thursday night.

In a message posted on his Facebook page after Wednesday’s talks, Dr Omar Zakhilwal — the Afghan ambassador to Islamabad — said the London meeting was held “to discuss and agree on a mechanism for genuine bilateral cooperation on fighting terrorism, agree on steps and measures to improve the current tense bilateral relations and mutual trust”.

“We are positive that the implementation of the mechanism we agreed upon can inject the needed trust and confidence for constructive forward-looking state-to-state relations and cooperation,” Dr Zakhilwal wrote.

A senior Pakistani diplomat, who attended the meeting, described the outcome of the discussion as “forward-looking”.

“Some progress was achieved, but discussions would continue,” he added.

The Afghan side, meanwhile, said the meeting was “good and constructive” and there was movement towards addressing concerns on both sides. “We will continue talking to build on the progress made during the meeting,” an Afghan diplomat told Dawn.

In response to a question about the reopening of border crossings, whose continued closure was turning into a humanitarian crisis for the landlocked Afghanistan, the Pakistani diplomat said they would be opened soon, depending on how Kabul proceeded on agreed steps.

Speaking at the weekly media briefing in Islamabad, Foreign Office spokesperson Nafees Zakaria explained that the border closures were “a temporary measure” and steps were being taken to address the challenge of sanctuaries in Afghanistan “so that sooner than later we are able to open the border, and resume the trading of goods and interaction of the people as usual”.

“I can’t give you the date, but we are mindful and are taking measures which are essential,” he said.

The dialogue in London was focused on mutual concerns about existence of terrorist sanctuaries on each other’s soil. Soon after the bombing of Lal Shahbaz Qalandar’s shrine, the Pakistan Army had handed over a list of wanted 76 TTP and Jamaat-ul-Ahrar (JuA) terror suspects living in hideouts along the Pakistan-Afghan border to Kabul.

Afghanistan then responded by sending a list of 85 Taliban and Haqqani network ‘commanders’, allegedly residing in Pakistan and linked any action against TTP and JuA terrorists to “verifiable action” by Pakistan.

The new army chief on Saturday said the military was ready to defend “every inch of our motherland” if attacked, during a visit to the Line of Control (LoC). The visit came less than a week since General Asim Munir took charge as the 17th army chief of Pakistan at a ceremony held at the … END_OF_DOCUMENT_TOKEN_TO_BE_REPLACED

When the Muslim Ummah will follow the religious orders and the principles given by the Prophet ﷺ, Muslims will be the cause of love, brotherhood and unity in the whole world. Islam always teaches peace,said Ameer Abdul Qadeer Awan. He said, Today, even non-Muslims who have implemented the orders of Islam in their lives are … END_OF_DOCUMENT_TOKEN_TO_BE_REPLACED