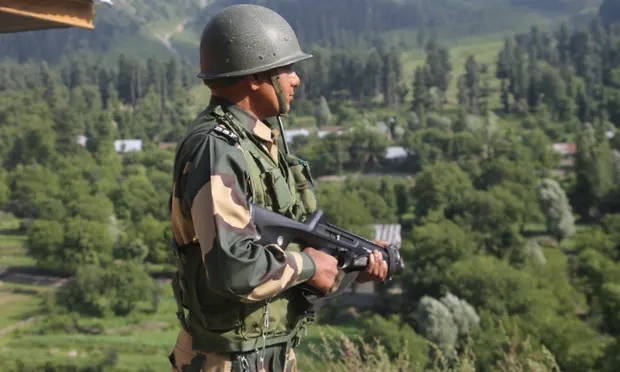 Locals near India’s border with Chi­na in the mountainous region of Lad­a­kh have claimed that the Indian government “ceded” land to China after both sides agreed to withdraw troops from contentious areas earlier this month, The Guardian reported on Monday.

India and China have been involved in a tense cross-border dispute since 2020 in the western Hima­layas. However, the two nations began pulling back soldiers from the contested area of Gogra-Hot Springs after top-level military mee­t­ings in which they agreed to deescalate the situation.

According to a statement by the Indian government after the agreement, the territory on both sides of the border, known as the line of actual control, has been restored to the ‘pre-standoff period’. As part of the truce, buffer zones were created in which neither side was allo­w­ed to patrol their troops.

However, talking to The Guardian, locals and elected representatives of the region have claimed that the buffer zones have been established in areas previously under Indian control.

“Our army is vacating areas which were not disputed at all, while Chinese troops are stationed in the areas traditionally patrolled by India,” Konchok Stanzin, an elected councillor from the region, told The Guardian.

Mr Stanzin claimed India had already ceded land during a 2021 agreement to withdraw from areas around Lake Pangong.

“We raised similar concerns in earlier disengagement, like in the Pangong Tso area where our army again lost a huge area,” he was quoted as saying.

“Earlier, our concern was about Chinese incursions only but now … our government is giving up our land happily. If India’s approach remains the same, we are going to lose more land.”

Locals are also apprehensive of the intrusion as they have lost massive areas which they used as grazing lands for their cattle, said Mr Stanzin. They fear this will impact their main sources of living — the cashmere wool-producing Changra goats.

According to The Hindu, Mr Gandhi also asked the government to explain how the territory ceded to China will be retrieved?

The stand-off between the two neighbouring nations started on May 5, 2020, after a violent clash in the Pangong lake areas. The tensions reached the tipping point a month later when a hand-to-hand battle in 2020 left 20 Indian and four Chinese soldiers dead.

As the conflict intensified, both sides moved tens of thousands of soldiers and heavy weaponry to the area.

Srinagar, October 01 : In India illegally occupied Jammu and Kashmir, Indian troops in their unabated acts of state terrorism martyred seventeen (17) Kashmiris in the last month of September. According to the data issued by the Research Section of Kashmir Media Service, today, of those martyred ten (10) Kashmiris were killed in fake encounters. … END_OF_DOCUMENT_TOKEN_TO_BE_REPLACED

Laal Singh Chaddha is the latest film to face targeted attacks from anti-Muslim, Hindu-nationalist trolls who some claim are beginning to impact box office performance In August this year, a week after the release of Laal Singh Chaddha, Bollywood’s adaptation of Forrest Gump, a Twitter account with about 280,000 followers, tweeted: ​​“#Urduwood is trending. Thanks to … END_OF_DOCUMENT_TOKEN_TO_BE_REPLACED

KARACHI: Foreign Minister Bilawal Bhutto-Zardari said on Thursday that Islamabad had so far not requested a restructuring, deferment or swap of debt owed to China in the wake of the catastrophic floods that hit the country. Insisting that whenever such a conversation takes place, it would be on Pakis­tan’s own terms, he said that he … END_OF_DOCUMENT_TOKEN_TO_BE_REPLACED No ‘debt swap’ talks with Beijing yet, says Bilawal →