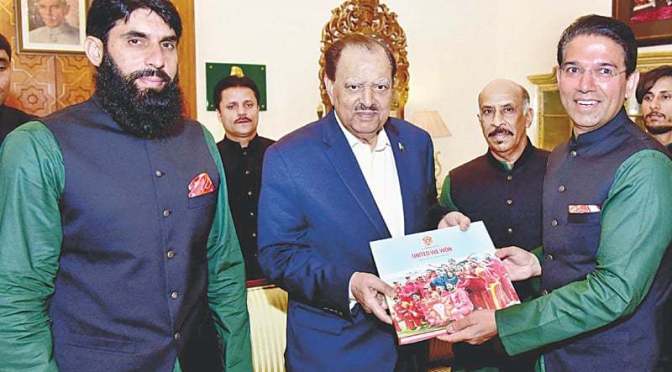 ISLAMABAD: Revival of international cricket on the home ground has defeated the menace of terrorism, said President Mamnoon Hussain on Monday.

The president gave credit to the government and the management of the Pakistan Cricket Board (PCB) for successfully organising final matches of the third Pakistan Super League (PSL) cricket tournament in the country, followed by a T-20 series against the West Indies in Karachi.

“Credit goes to the PSL team for reviving international cricket in Pakistan. By holding this mega event in the country, terrorism has been defeated,” he said while talking to the winners of this year’s PSL tournament, Islamabad United.

In pictures: Islamabad United win PSL with Karachi back on the cricket map

“The massive turnout for the matches has sent a message to the world — Pakistan is a peaceful and sports-loving nation,” he added.

The PSL winners and the team’s owner, Syed Ali Raza Naqvi, called on Mr Hussain at the presidency and the latter during the meeting said that promoting sports in the country would strengthen the economy and create employment.

He discussed how sportsman spirit and tolerance were of the utmost importance in all games.

The president lauded the performance of some of the young players and expressed the hope that they would excel further.

“We have huge expectations from young players like Shadab Khan, Hussain Talat, Asif Ali and Sahibzada Farhan,” he said.

The president also highlighted one of the consistent problems faced by players — poor fitness in the national cricket team. He stressed that the sportsmen needed to focus on their fitness and health.

He advised young players to follow in the footsteps of team caption Misbahul Haq and Younas Khan in order to win laurels for the country.

Islamabad United’s captain and the team management thanked the president and expressed their resolve to continue to serve the nation to best of their capabilities.

After a successful tour by the West Indies, the country’s cricket authorities are hopeful that they will be able to host a full international cricket series in 2020.

The three-match series against the World Twenty20 champions was held in Karachi and was accompanied by a wave of optimism. Enthusiastic fans braved heavy security checks to express their gratitude to the West Indies cricket team for the visit.

Last month, Karachi also hosted the PSL final, the biggest cricket event in the city since a 2009 attack on the visiting Sri Lankan team in Lahore that drove international cricket out of the country.

Following the attack, international cricket teams were reluctant to play in Pakistan due to security concerns and the suspension of international cricket on the home front had compelled the PCB to host its international fixtures in the UAE. However, with the security situation dramatically improving over the last three years, the board has been taking “gradual steps” to bring cricket back home.