Players including winning captain Darren Sammy detailed a journey involving bullet-proof buses and closed roads, before they were rushed straight back to the airport with no time for celebrations.

The rest of the Pakistan Super League was played in the United Arab Emirates (UAE), but Sunday’s incident-free final has opened the door to more international cricket with a World XI now scheduled to visit in September.

Several foreign players, including England’s Kevin Pietersen and Luke Wright, skipped the final over safety fears, but Sammy praised the arrangements in Pakistan.

“Security was really tight,” the West Indian told AFP in Hong Kong, where he is playing this week’s T20 Blitz competition.

“I only thought about security when I was on the bus,” added the two-time World Twenty20-winning captain, who led Peshawar Zalmi to a lopsided victory over Quetta Gladiators.

“Peshawar is like a family — once one foreign player was going there we were all going. It’s like a brotherhood.”

A resurgence of attacks — including a suicide blast which killed 14 in Lahore — had raised concerns, but the final’s successful staging was widely praised in Pakistan as a stand against militancy.

Asked whether international cricket should now return, Sammy replied: “It’s not in my jurisdiction. Playing in Lahore was like playing anywhere in the world once I was in the stadium. The fans are just as passionate.”

“It’s a small step in the right direction — time will tell.”

Team-mate and England international Chris Jordan said he weighed his decision carefully and spoke with his family before opting to play in Lahore.

Jordan said, “You have to ask the bigger heads over there” about playing more games in Pakistan. But he said he would be happy to return “with the same set-up”.

“That level of security did help to put the guys’ minds at ease so that we could get on with the game and put on the performance that we did,” said Jordan.

“That level (of security) is a level that made everyone as comfortable as they needed to be.”

Sammy said the journey was “Airport, hotel, stadium, airport. 3am to 3am. It was more or less in and out”.

Another Peshawar player, West Indies all-rounder Rayad Emrit, was a late replacement for the final and travelled for 25 hours to play in Lahore.

“There’s always risk if you’re playing in Pakistan. But to be honest when we got there I felt safe,” he said, calling the sold-out Gaddafi Stadium “electrifying”.

“We had armoured vehicles, took us straight to the hotel. They closed off all the streets and then back to the ground where they did the same thing.”

“From the game we headed straight to the airport… No time (to celebrate).”

The Islamabad High Court (IHC) on Wednesday ordered the government to put the names of those involved in posting blasphemous content on social media on the Exist Control List (ECL).

Justice Shaukat Aziz Siddiqui passed the order while hearing a case pertaining to the alleged presence of ‘blasphemous content’ on social media.

The case was filed by Salman Shahid (son-in-law of Abdul Aziz of Lal Masjid fame).

In his petition, Shahid had argued that the presence of blasphemous content on social media websites was “hurting the religious sentiments of Muslims”.

The petition also alleged that pages and videos against the Holy Prophet (Peace be Upon Him) and revered personalities had not been blocked by the respondents nor had any steps been taken so far to remove the content.

All the respondents were shown the ‘blasphemous’ content on social media in the chamber of IHC Chief Justice Siddiqui. Subsequently, Justice Siddiqui directed them to place the names of those involved on ECL. He questioned PTA chairman what he had done so far to get the content off social media pages.

In his remarks, Justice Siddiqui said he had been unable to sleep since he saw the materials available with the court.

“I will go to every extent to bring this case to its logical end and if needed I will even ban social media in Pakistan,” he said.

Secretary interior assured the court that all possible measures would be taken to remove the content from social media and arrest the culprits.

The active wear company recently launched a sports-friendly version of the traditional headscarf.

According to Vogue Arabia, the pull-on Pro Hijab is made of light stretchy breathable fabric, a welcome relief from traditional fabrics like cotton, which retains moisture and can cause discomfort when an athlete gets sweaty.

“The Nike Pro Hijab was designed as a direct result of our athletes telling us they needed this product to perform better,” Megan Saalfeld, a Nike spokesperson, told Al Arabiya English. The Emirati Olympian Amna Al Haddad told Nike during a visit to the company’s sports lab in Oregon that she had just one hijab she could wear, and she had to hand-wash it in the sink every night during competitions.

The brand has been developing the product for over a year and the hijab has been tested by many hijab wearing athletes.

While many small companies have attempted active wear for Muslim women, Nike is the first multinational company to take this step. Nike plans to release the Pro Hijab early next year. 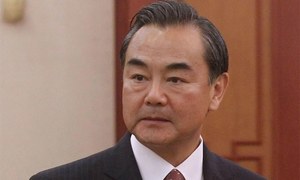 Chinese Foreign Minister Wang Yi called on North Korea on Wednesday to stop nuclear and missile tests and for the United States and South Korea to stop joint military drills that the isolated North regards as preparation for war.

North Korea launched four ballistic missiles on Monday in response to the military exercises. Wang said those tests and the drills were causing tensions on the Korean Peninsula to increase like two “accelerating trains coming toward each other”.

“China’s suggestion is, as a first step, for North Korea to suspend nuclear activity, and for the US and South Korea to also suspend large-scale military drills,” Wang said at his annual news conference on the sidelines of the meeting of China’s parliament in Beijing.

He said this “dual suspension” would allow all sides to return to the negotiating table.

North Korea fired four missiles into the sea off Japan’s northwest coast on Monday, angering South Korea and Japan with the latest in a series of ballistic missile and nuclear tests in defiance of United Nations resolutions in recent months.

“There remains a chance of resuming talks, there is still hope for peace.”

The United States had started to deploy the first elements of its advanced Terminal High Altitude Area Defence (THAAD) anti-missile system to South Korea after the North’s latest tests, US Pacific Command said on Tuesday.

The deployment of the anti-missile defence system was likely to deepen a brewing conflict between South Korea and China, which has angrily opposed the THAAD deployment as destroying the regional security balance.

The planned THAAD installation, which South Korea has said would be operational by the end of the year, has led to a diplomatic standoff between China and South Korea.

Chinese authorities have closed nearly two dozen retail stores of South Korea’s Lotte Group, which approved a land swap with the military last week to allow it to install the system.

China objects to the THAAD deployment, saying its territory is the target of the system’s far-reaching radar. South Korea and the United States have said the missile system is aimed only at curbing North Korean provocations.

China is isolated North Korea’s most important supporter, but Beijing has been angered by its repeated missile and nuclear tests and has signed up for increasingly severe UN sanctions against Pyongyang, including suspending coal imports.

China has also rejected accusations from US President Donald Trump that Beijing could be doing more, saying the problem was ultimately between Washington and Pyongyang.

Torkham and Chaman crossings on the Pak-Afghan border opened for the second day on Wednesday as thousands of stranded Afghans and Pakistanis crossed into their respective countries.

The Pakistan government had decided to close the border last month amid a string of deadly militant attacks which the military leadership claimed were carried out by militants operating from safe-havens in Afghanistan.

The border was temporarily reopened for two-days on Tuesday in a bid to to ease tensions between the two neighbours and relieve some of the backlog of people and vehicles at the crossings.

According to the state-run daily, 450 Pakistanis have returned to their country via Torkham border check-post since the border opened on Tuesday.

The Indian Charge d’Affaires (Cd’A) in Islamabad was called to the Ministry of Foreign Affairs today and conveyed Government of Pakistan’s unequivocal rejection of India’s illegal and unilateral actions of 5 August 2019 in Indian Illegally Occupied Jammu & Kashmir (IIOJK), which breached international law, UN Charter and the 4th Geneva Convention as well as … END_OF_DOCUMENT_TOKEN_TO_BE_REPLACED

Al Qaeda leader Ayman al-Zawahiri was killed in a US strike in Afghanistan over the weekend, American President Joe Biden said on Monday. Zawahiri, an Egyptian surgeon who had a $25 million bounty on his head, helped coordinate the Sept 11, 2001, attacks that killed nearly 3,000 people. US officials, speaking on the condition of … END_OF_DOCUMENT_TOKEN_TO_BE_REPLACED

WASHINGTON: Former US president Donald Trump returned to the US capital this week and delivered a speech that’s being interpreted as his first for the 2024 election campaign. “As Trump speaks in Washington, his allies prepare for a second term,” The Washington Post reported. “Trump supporters are already working on a government-in-waiting if he wins re-election in … END_OF_DOCUMENT_TOKEN_TO_BE_REPLACED