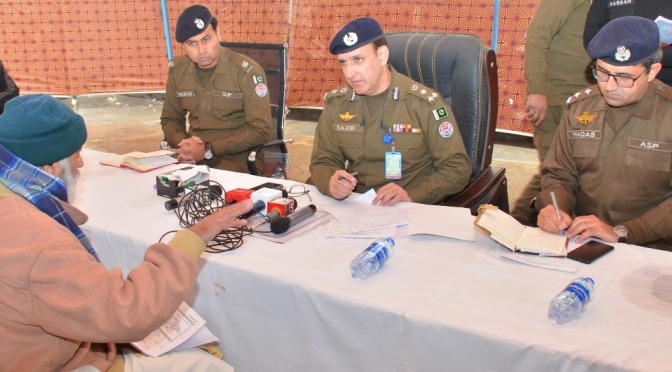 Taxila: CPO Rawalpindi Sajid Kayani has organized an open court at PS Taxila with the participation of a large number of citizens including SP Pothohar, SDPO Taxila and Circle SHOs.

CPO Rawalpindi listened to the problems of the citizens and issued orders on the spot for their solution.

The purpose of open court is to hear your problems at your doorstep,
So that problems can be identified and steps can be taken to solve them, said CPO Rawalpindi Sajid Kayani.

The CPO directed the officers to take legal action on the petitions of the citizens and submit the report within the given time frame.

The CPO Rawalpindi said that the purpose of open court is to hear your problems at your doorstep, so that problems can be identified and steps can be taken to solve them.

At the police station level will ensure the solution of the problems of the citizens.

Failure in service delivery will not be tolerated under any circumstances.

Open court proceedings will continue in the future, service delivery, merit and supremacy of law will be ensured in all cases. 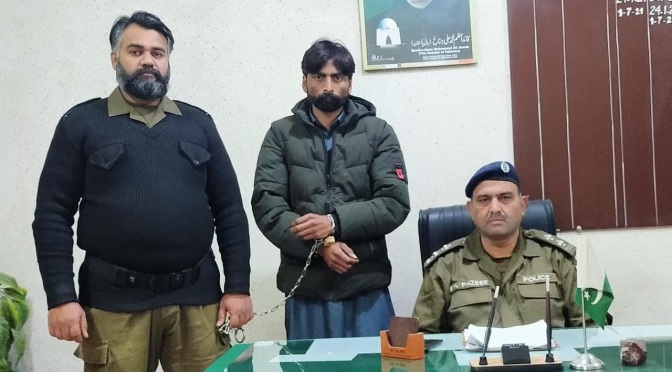 Accused Ismail raped me by tricking me into marriage, plaintiff

PS Wahcantt immediately registered a case at the request of the victim and arrested the accused.

Rawalpindi Police is ensuring a zero-tolerance policy regarding the abuse of women and children. CPO Rawalpindi Sajid Kayani 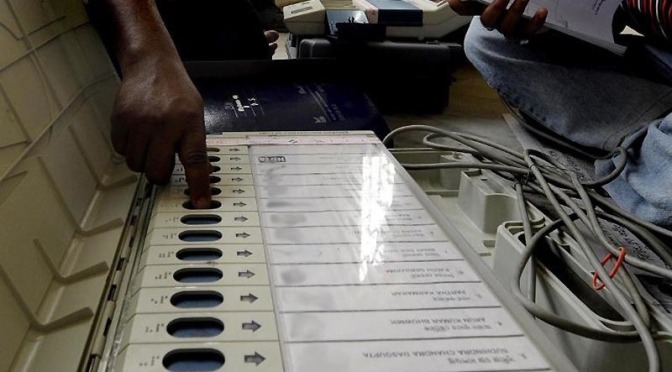 LAHORE: The Punjab government has announced its plans to introduce Electronic Voting Machines (EVMs) in the upcoming local government elections on a plea that the federal government has already legislated and declared the use of the machines mandatory in all upcoming elections, while the government also managed to allay reservations of its ally, PML-Q, about the Punjab Local Government (Amendment) Act (PLGA) 2021.

“Since the federal government has legislated that all upcoming elections, including by-polls, will be held through the EVMs, how can Punjab deviate from the law?” a senior government official wondered while talking to Dawn on Wednesday.

“The Punjab government now earnestly wants that the clause regarding use of EVMs in all upcoming elections is included in the PLGA 2021, which is currently in the finalization stages,” the official added.

The federal government has already asked the Election Commission of Pakistan (ECP) to hold all the next elections, including by-polls, through the EVMs. Federal Information Minister Fawad Chaudhry had also hinted that the government would not fund the commission if it did not hold the polls through the EVMs.

The commission, in the meanwhile, has asked the Punjab government to submit the draft amended PLGA 2021 in a week otherwise the LG polls would be held as per the law in vogue. “The ECP plans to delimit constituencies afresh according to the amended manuscript of the law, otherwise it will be compelled to hold elections as per the old delimitation of LG constituencies,” an ECP official explained.

The opposition parties, however, vehemently rejected the Punjab government’s plans to bulldoze the all-important legislation. They maintain the PLGA 2021 is being approved in an undemocratic way as no stakeholders have been consulted.

Even the PTI’s ally, the PML-Q, had previously raised objections and its minister, Muhammad Rizwan, had left the Punjab cabinet meeting after expressing his resentment that his party was not consulted.

Since Punjab Governor Chaudhry Sarwar is currently out of the country and Punjab Assembly Speaker Chaudhry Parvez Elahi is holding the acting charge of the governor, he called for a briefing on the proposed amendments to PLGA 2021.

Mr Elahi, who is also the PML-Q’s Punjab president, had sought that tehsil councils be made part of the local government system besides fixing qualification requirements for mayor and district council chairman.

The Punjab government sprang up to control the damage. The chief minister held a meeting with the provincial law and local government ministers and the local government secretary and reviewed the law as well as the objections raised by the PML-Q. The CM was directed to continue consultations with the PML-Q and their objections be addressed, adding the new LG act had been drafted with consultations and hard work to empower the grassroots.

Sources claimed a Punjab government official delegation yet again met Mr. Elahi and convinced him that tehsil council could not be included in the law. Over the objection that at least intermediate education should be made mandatory for the mayor and district council chairman, the delegation informed the acting governor the qualification bar could not be included because there was no such requirement for MPAs and MNAs.

“Mr. Elahi agreed with the government’s explanation, but said at least the word “preferably” be included in the law with regards to the qualification,” claimed a government official, who was part of the delegation.

Reacting to the proposed amendments to the law, PML-N Punjab information secretary Azuma Bukhari said the PTI government did not bother consulting the opposition parties while preparing the all-important law. The government was doing legislation through special committees, while no discussion was allowed in the Punjab Assembly, she said, adding, “I was suspended from the assembly session when I tried to argue on the proposed law by the end of the last financial year.”

Regarding the Punjab government’s plan to make the use of EVMs mandatory in the next elections, Ms. Bukhari said, “Who are they to decide how elections should be held? This is the sole mandate of the ECP.”

PPP’s parliamentary leader Hasan Murtaza said the PTI government always did “bad legislation” without consulting the stakeholders. “It is a tragedy that the PTI government is trying to bring in an ordinance when the Punjab Assembly was there to legislate,” he remarked.

Mr. Murtaza said the ruling party should take all parliamentary parties onboard and rectify their reservations. “It is strange that the PTI government is not giving importance to 50 percent legislators in the Punjab Assembly,” he stressed.

Answering a question about the use of EVMs, he said PPP chairman Bilawal Bhutto-Zardari had already rejected the government’s plan and moved to threaten and pressurize the ECP. “The PTI government wants to repeat the history of [Results Transmission System] and was looking to get an extension through the use of EVMs,” he claimed.

On the other hand, PML-Q Punjab information secretary Mian Imran Masood says their party accepted the government’s proposal to use EVMs in elections after holding negotiations with the ruling PTI after the joint session of parliament had to be called off briefly owing to reservations of the government’s allied parties.

The PTI government had dissolved the local bodies constituted under the PLGA 2013 by promulgating the PLGA 2019 in May 2019 soon after coming to power. It had appointed LG administrators – some 30 months ahead of completion of the tenure of LG representatives mostly belonging to the PML-N.

However, the Usman Buzdar administration reluctantly restored the local governments in the province in October to comply with a Supreme Court order. The existing local governments’ tenure will expire on Dec 31. 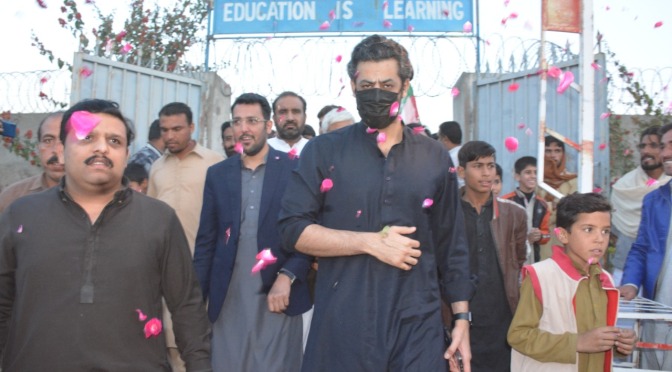 On this occasion MNA Mansoor Hayat Khan in his speech once again spoke on education and training and said that we followed our manifesto and spent 70% of the budget on education.

MNA Mansoor Hayat Khan also slammed the PDM and the opposition and said that in the last 35 years they have deprived the constituency of development. Our 35 months have proved to be people friendly. 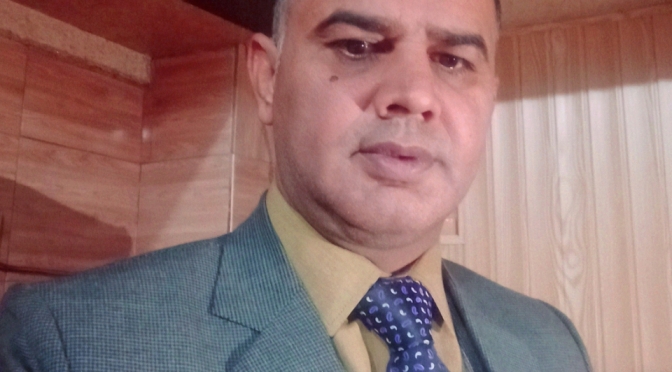 According to the details, the accused Adil Khan son of Mumtaz Khan resident of Shahia Wah Cantt was registered under FIR No. 659/2020 under 9c crime in Wah Cantt Police Station against Taxila.

The accused was accused of possessing and selling 1450 grams of Hashish.

The trial of the accused Khalid Mehmood Cheema was being heard in the court of Additional Sessions Judge Taxila and the investigating officer was Mushtaq SI / NIU.

Tahir Mehmood Raja Advocate argued that he had made a false case against the accused for not fulfilling the illegitimate demand of the police. The prosecution failed to prove its case and the court acquitted the accused.

PARIS, Jan 13 (Reuters) – Tens of thousands of French teachers angry with the government’s COVID-19 rules walked off the job on Thursday and took to the streets to demand better protection for pupils and staff against infection. “Stop your contempt,” and “We’re fed up with tests” teachers proclaimed on banners in rallies across France, … END_OF_DOCUMENT_TOKEN_TO_BE_REPLACED

NAROWAL: The Kartarpur Corridor reunites two brothers who separated 74 years ago amid chaotic partition. Muhammad Siddique, 80, and Habib, 78, separated 74 years ago at the time of partition. They hugged and cried and garlanded each other on the happy occasion of reunion. The Kartarpur administration distributed sweets. Siddique, a resident of Phugaran village … END_OF_DOCUMENT_TOKEN_TO_BE_REPLACED

The banned Tehreek-i-Taliban Pakistan (TTP) on Wednesday confirmed the death of senior leader Mufti Khalid Balti alias Mohammad Khurasani, whose killing in the eastern Nangarhar province of Afghanistan was revealed this week. The current TTP spokesman, who also shares the Mohammad Khurasani alias with Balti, confirmed his death in a statement but shared no details of how … END_OF_DOCUMENT_TOKEN_TO_BE_REPLACED