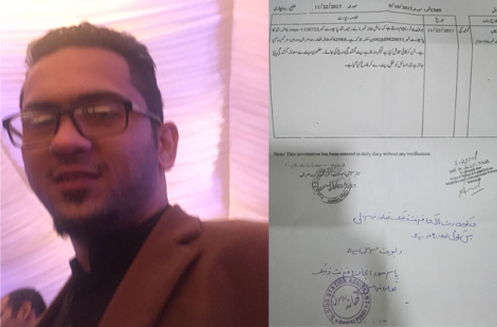 A group register an application of lost passport in different PS ratta amral in Rawalpindi after renewal of Fake new Passport they smuggled children to Gulf countries.

Islamabad: foreign smuggling group involved in Child smuggling in Islamabad. After renewal of passport gang smuggle children from Pakistan to Gulf Country. In the limit of Ramna PS whereas the citizen Nisar has lodged a report to the police that his two daughters, 10 years old Rahima and, 4-year-old Fatima kidnapped by her wife Maryam Noor with her brother Ehtisham Noor and one known person , they abducted my two daughters . Original Passport is in my custody. Defender said they have sent my daughter to Gulf Country with fake passport.

According to the defendant, he applied to PS Ramna The case was registered , Asghar, the Investigation Officer of this case, said that no record in the PS rattan Amaral has been found on the front desk On which report new passport were issue .while Yasir Saad in-charge of Front Desk also confirmed and writes the report. While the raids are being hit for the arrest and unknown mills including both siblings have been done. FIA also working on it to recover the kidnapped Children

Rallies, protests were held in AJK on India’s Republic Day

MUZAFFARABAD: Students, civil society, and political activists lined up in the capital of Azad Jammu and Kashmir (AJK) on Wednesday to express anger at India’s denial of Kashmiris’ right to self-determination amid horrendous rights violations in the illegally occupied territory of the disputed Himalayan region. The demonstration was held at Burhan Wani Chowk as part … END_OF_DOCUMENT_TOKEN_TO_BE_REPLACED

January 26 was the Republic Day of India, Celebrated in the northeastern states of India as “Black Day”.Social, liberation, and militant movements in India’s northeastern states went on a wheel-jam / shutter-down strike. Routine life became paralyzed and the majority of people preferred to stay at home instead of attending events. These movements (Nagaland Army, … END_OF_DOCUMENT_TOKEN_TO_BE_REPLACED

OSLO: On their first visit to Europe since returning to power, the Taliban held landmark talks with Western diplomats in Oslo on Monday over the humanitarian crisis in Afghanistan, a meeting the Islamist regime’s delegation called an “achievement in itself”. The international community has however insisted the Taliban must respect human rights before aid can … END_OF_DOCUMENT_TOKEN_TO_BE_REPLACED