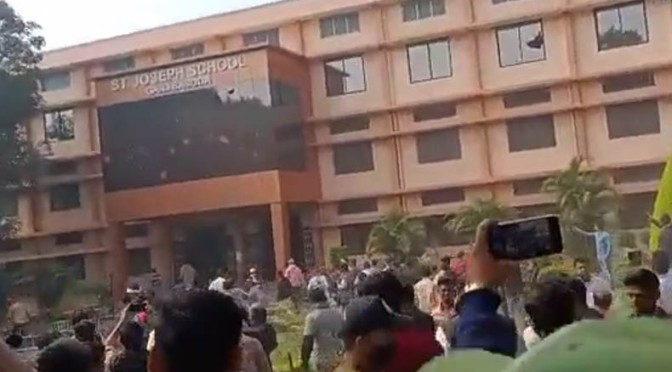 Any religion other than Hinduism has become a liability in Modi’s India. Vicious Hindutva ideology, seeking Hindu domination in India, is the chief guiding principle for BJP-led Indian government.

As a result, Indian Christians are forced to hide their faith or perform religious services in secrecy. According to a report by human rights group, more than 300 attacks on Christians took place in the first nine months of 2021, including at least 32 in Karnataka.

The report found that of the total 305 incidents of anti-Christian violence, four north Indian states registered as many as 169 of them: 66 in BJP-ruled Uttar Pradesh, 47 in Congress-ruled Chhattisgarh, 30 in tribal-dominated Jharkhand, and 30 in BJP-ruled Madhya Pradesh.

At least nine Indian states have planned anti-conversion laws, including Chhattisgarh, which, activists say, has emerged as a “new laboratory” for anti-Christian hatred in India. On November 28, 2021, a newly inaugurated church in Delhi faced disruption and vandalism in its first Sunday service when members of a militant Hindu nationalist group called the Bajrang Dal stormed the meeting.

According to local observers, the acts of violence facing Christian communities far from being random occurrences are part of a concerted campaign to inflame tensions in a bid to justify new laws restricting their worshiping activities.

The world must act now to halt Christian persecution; otherwise, another genocide is in making and this time Indian Christians will be the target.

According to Indian Constitution citizens have the freedom to “profess, practice and propagate” any religion. But during seven years of Modi, eight BJP-ruled states have passed these discriminatory laws which have led to increased violence against Christians in India.

US Commission on International Religious Freedom, a government body, recommended that India be put on its red list for “severe violations of religious freedom”.

The report also recommended that US should impose targeted sanctions on individuals and entities responsible for severe violations of religious freedom by freezing those individuals’ or entities’ assets and/or barring their entry into the United States.