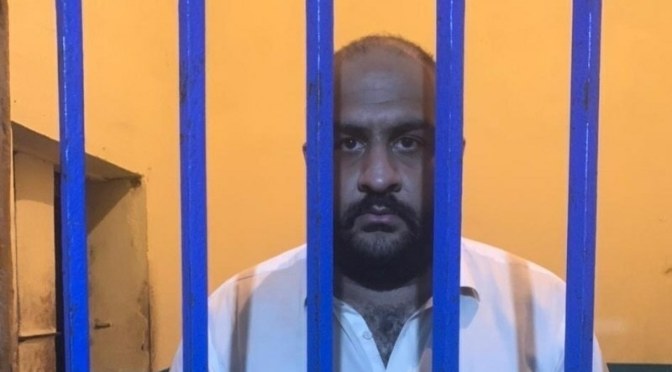 A sessions court in Islamabad on Friday sentenced Usman Mirza to life imprisonment for holding a couple at gunpoint, forcing them to strip, beating them up, and filming the entire ordeal.

Four of Mirza’s accomplices and co-accused — Hafiz Ataur Rehman, Adaras Qayyum Butt, Mohib Bangash and Farhan Shaheen — have been sent to jail for life as well, while two other men, Umar Bilal and Rehan Hassan Mughal, have been acquitted.

According to the court’s order, a copy of which is available with Dawn.com, Usman and his accomplices have been sentenced to life imprisonment under Section 354-A (assault or use of criminal force to a woman and stripping her of her clothes) of the Pakistan Penal Code.

The court has ordered them to pay a fine of Rs200,000 each. In case of non-payment, they would have to undergo six months of simple imprisonment.

The convicts have also been sentenced to seven years in prison for criminal intimidation (Section 506) and three years for intending to insult the modesty of a woman (Section 509(i)).

The sentences would run concurrently with the benefit of Section 382(B) (period of detention to be considered while awarding sentence of imprisonment) of the Criminal Procedure Code granted to the convicts.

The case surfaced when a video of four people harassing the couple at gunpoint went viral on social media in July 2021.

Initially, an FIR was registered under section 341 (punishment for wrongful restraint), 354A (assault or use of criminal force against woman and stripping her of her clothes), 506 (ii) (punishment for criminal intimidation) and 509 (word, gesture or act intended to insult the modesty of a woman) of Pakistan Penal Code.

State takes up the case

The E-11 torture case, which lasted seven months, made headlines once again in January 2022 when the woman complainant retracted her statement against the accused and told a trial court that she did not want to pursue the case.

She said she never filed the complaint with the police, adding the investigation officer had taken her thumb impressions on blank papers. She also refused to identify the accused and said she saw them for the first time in the police station.

Immediately afterward, Parliamentary Secretary for Law Maleeka Bokhari said that the state would take up the case as it had “irrefutable video and forensic evidence on record”.

“The video of Usman Mirza (primary accused) has been verified by the Pakistan Science Foundation, and we have photogrammetry (pertaining to the technique for making measurements through photographs) evidence,” she had said in a statement.