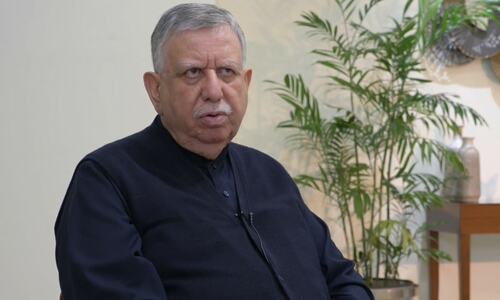 Finance Minister Shaukat Tarin on Wednesday said Prime Minister Imran Khan should not have reacted “publicly” against the European Union in his recent speech where he lashed out at the bloc’s ambassadors for their “undiplomatic” statement asking Pakistan to condemn Russia for its invasion of Ukraine.

Speaking during a public rally in Vehari last week, the prime minister had questioned if the EU had called out India for its actions in occupied Kashmir, which went against international law.

“Has anyone of you severed trade relations with India or objected to its unlawful actions,” the PM asked EU representatives, adding, “are we slaves and act according to your wishes.”

The premier was referring to a letter penned by 23 EU envoys last week, urging Pakistan “to join them in condemning Russia’s actions [in Ukraine] and to voice support for upholding the UN Charter and the founding principles of international law”.

Objecting to that press release, the Foreign Office had said: “We took note of that and in a subsequent meeting with a group of ambassadors, we expressed our concern about that because it was not the way diplomacy should be practiced”.

During a press conference in Islamabad today, in response to a question by a journalist who asked if the PM’s comments could have a negative impact on Pakistan’s trade with the bloc, the finance minister said, “I don’t think we should worry about what they [EU] will do.”

Tarin recalled that the EU representatives had sent a letter to Pakistan, asking it to vote against Russia, adding that “our prime minister just shared his sentiments on it”.

He recalled that the EU had remained silent on India’s violations of UN resolutions and international law and that “Pakistan had just abstained from voting [in the UNGA session on Russia].”

Defending the premier for his remarks, Tarin said they [the EU] should not tell Pakistan what to do and that it was the right of the prime minister to protect his country and its prestige.

“He just reacted publicly, which may be, he should not have done,” the minister added.

He maintained that Pakistan had an independent foreign policy that stipulated that no country should violate the other’s sovereignty and that disputes be settled peacefully.

‘IMF should not have problems with relief package’

To another question, the finance minister said the government also held discussions with the International Monetary Fund (IMF) over a recent relief package that was announced by the PM.

“We conversed only about what was necessary,” Tarin said.

He added Pakistan neither was increasing its fiscal deficit nor taking any loan to provide relief to people. He said the government announced subsidies for people due to improvement in revenues of late.

He explained that the government extracted some amount from allocations for Ehsaas Programme, Covid-19 budget, adding that “we also had dividends from state-owned enterprises”. He said there were multiple areas from where the government gathered finances to formulate the relief package.

“I do not think they [IMF] should have any problem with that,” the minister insisted.

He said it was not a concern of the IMF but “it is the responsibility of the government to apprise them of such decisions including looming political instability as well.”