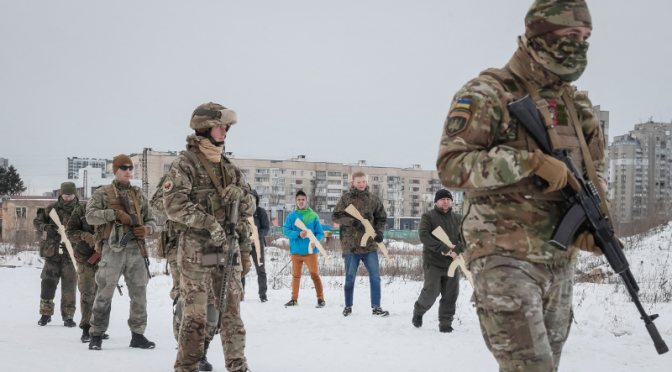 KIEV: Ukraine on Sunday pushed back at “apocalyptic predictions” over a potential Russian invasion after officials in the United States sounded dire warnings that Moscow had stepped up its preparations for a major incursion.

US officials said the Kremlin has assembled 110,000 troops along the border with its pro-Western neighbor but intelligence assessments have not determined if President Vladimir Putin has actually decided to invade.

The Russian force amassed on the frontier is growing at a rate that would give Putin the firepower he needs for a full-scale invasion — some 150,000 soldiers — by mid-February, US officials have said.

They assess Putin wants all possible options at his disposal: from a limited campaign in the pro-Russian Donbas region of Ukraine to a full-scale invasion. Russia denies that it is planning an incursion into Ukraine.

“Do not believe the apocalyptic predictions. Different capitals have different scenarios, but Ukraine is ready for any development,” Ukra­ine’s Foreign Minister Dmytro Kuleba wrote on Twitter.

“Today, Ukraine has a strong army, unprecedented international support, and the faith of Ukrainians in their country. It is the enemy who should fear us.” Presidency advisor Mykhailo Podolyak insisted that the chances of finding a diplomatic solution to the crisis remained “substantially higher than the threat of further escalation”.

Kiev — backed up by some European allies — has consistently sought to play down fears of an imminent attack as it tries to avoid inflicting further harm on its struggling economy.

Podolak said the latest Russian moves were “no surprise” as Mos­cow has sought to keep up pressure on Kiev by conducting large-scale troop rotations, maneuvers, and weapon deployments on a regular basis since massing forces at the border last spring.

“How long will such Russian activity last and for what purpose is it maintained? Only the Kremlin can know the exact answer to this question,” he said.

The stark warnings from the US — part of a deliberate attempt from Washington to pre-empt any Russian actions — come as Europe pushes to defuse the crisis.

French President Emmanuel Macron heads to Moscow Monday and Kiev on Tuesday seeking to de-escalate the crisis and push forward a stalled peace plan for the festering conflict with Russian-backed separatists in eastern Ukraine.

German Chancellor Olaf Scholz will also visit the region for talks with Putin and Ukrainian President Volodymyr Zelensky the following week in a bid to further the diplomatic efforts.

US officials said if Moscow does opt for a full-scale attack, the invading force could take the capital Kiev and topple Zelensky in a matter of 48 hours. 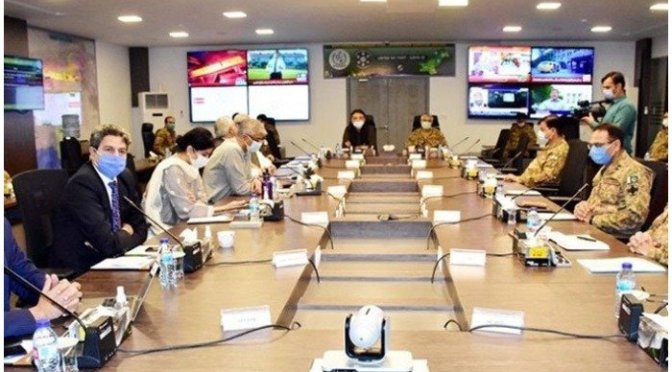 The National Command and Operation Centre (NCOC) on Monday decided to ease restrictions on the number of people allowed to attend matches during the upcoming Lahore leg of the Pakistan Super League (PSL) 2022.

In a statement, the NCOC said it has given the Pakistan Cricket Board (PCB) the go-ahead to allow spectators up to 50pc of the stadium’s capacity in matches till February 15 while 100pc crowd occupancy has been allowed from February 16 onwards.

Previously, the NCOC had allowed up to 25pc occupancy during the Karachi leg of the tournament.

The spectators must be fully vaccinated, the NCOC said, adding that unvaccinated children under 12 years of age would also be allowed.

The decision was taken in an NCOC meeting chaired by Planning Minister Asad Umar which discussed epidemic data, national vaccination progress, inbound health protocols, and the second phase of the ongoing PSL.

In its meeting today, the NCOC also decided that Rapid Antigen Testing (RAT) for inbound passengers on arrival at Pakistani airports would be abolished from Tuesday.

“RAT test will continue to be conducted for deportees from foreign countries and for non-vaccinated individuals arriving from land border terminals,” the forum said.

The decisions come amid an improving coronavirus situation with infections falling and the positivity rate declining.

Pakistan reported 3,338 new coronavirus cases in the last 24 hours, down from 4,874 a day earlier. It marked the second straight day that less than 5,000 infections were confirmed.

Meanwhile, the national positivity rate stood at 7.5pc. It has remained below 10pc for a week.

“After a sudden spike in cases, the graph has straightened, but we cannot say that the wave has declined. It has happened due to five reasons or steps taken by the government from the platform of the NCOC,” Special Assistant to the Prime Minister on Health Dr. Faisal Sultan told Dawn last week.

“The first reason is that every pandemic has a natural cycle and it declines after some time. Other factors are steps taken by NCOC, such as [a] ban on indoor weddings that had become a major cause of the spread of [the] virus. Other reasons included segregated classes in educational institutions and curbs in other sectors, such as transport,” he said

Filmmaker Nadav Lapid, head of the jury at the International Film Festival of India (IFFI), slammed the controversial film The Kashmir Files – an official entry at the event – calling it a “propaganda, vulgar movie, inappropriate for an artistic competitive section of such a prestigious film festival”. The controversial Kashmir Files, laced heavily with the anti-Muslim sentiment, … END_OF_DOCUMENT_TOKEN_TO_BE_REPLACED

The Inter-Services Public Relations (ISPR) on Thursday denounced a top Indian military official’s statement about taking control of parts of Azad Kashmir as an “apt manifestation” of the Indian army’s “delusional mindset”. “The unwarranted statement of a high-ranking Indian army officer concerning Azad Jammu and Kashmir is an apt manifestation of Indian armed forces’ delusional … END_OF_DOCUMENT_TOKEN_TO_BE_REPLACED

After weeks of intense speculation and rumours, Prime Minister Shehbaz Sharif on Thursday chose Lt Gen Asim Munir as the new chief of army staff (COAS). Information Minister Marriyum Aurangzeb made the announcement on Twitter, saying the premier had made the choice while exercising his constitutional authority. She further said that Lt Gen Sahir Shamshad … END_OF_DOCUMENT_TOKEN_TO_BE_REPLACED