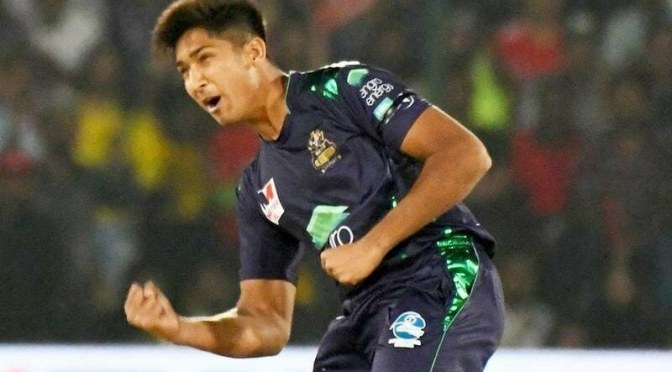 The Pakistan Cricket Board (PCB) on Friday suspended Quetta Gladiators pacer Mohammad Hasnain from further participation in the ongoing seventh edition of the Pakistan Super League (PSL) as well as any form of international cricket after a bowling examination found that his right arm exceeds the permissible 15-degree limit.

Hasnain’s bowling action was reported by umpires during a game between Sydney Thunder and Adelaide Strikers in Australia’s Big Bash League on January 2. He was subsequently tested at the International Cricket Council-accredited biomechanics laboratory in Lahore as the fast bowler was due to fly back home in time to compete in the PSL.

“As per the Illegal Bowling Action Regulations, until Hasnain clears his reassessment, he will remain suspended from bowling in the international cricket,” the PCB said in a statement.

The cricket board said it had received a formal and detailed report from Cricket Australia on Hasnain’s assessment test and quoted its bowling experts as saying the “problem can be resolved.”

The PCB said “Hasnain is an asset for Pakistan cricket” and one of the very few bowlers to consistently click 145kmp.

“As such, and keeping his future and Pakistan’s interest at the forefront, the PCB, on the recommendation of the HBL PSL 2022 Technical Committee, has decided he will not be allowed to continue to participate in the HBL PSL,” the board said in its statement.

The PCB added that it will now appoint a bowling consultant tasked with working with Hasnain so that he could rectify his bowling action and be ready for a reassessment.

The board said the bowler would now utilise the current time with the PCB-appointed bowling consultant to modify his bowling action so that he could apply for a reassessment and become eligible to “return to international cricket as quickly as practically possible”.

Srinagar, October 01 : In India illegally occupied Jammu and Kashmir, Indian troops in their unabated acts of state terrorism martyred seventeen (17) Kashmiris in the last month of September. According to the data issued by the Research Section of Kashmir Media Service, today, of those martyred ten (10) Kashmiris were killed in fake encounters. … END_OF_DOCUMENT_TOKEN_TO_BE_REPLACED

Laal Singh Chaddha is the latest film to face targeted attacks from anti-Muslim, Hindu-nationalist trolls who some claim are beginning to impact box office performance In August this year, a week after the release of Laal Singh Chaddha, Bollywood’s adaptation of Forrest Gump, a Twitter account with about 280,000 followers, tweeted: ​​“#Urduwood is trending. Thanks to … END_OF_DOCUMENT_TOKEN_TO_BE_REPLACED

KARACHI: Foreign Minister Bilawal Bhutto-Zardari said on Thursday that Islamabad had so far not requested a restructuring, deferment or swap of debt owed to China in the wake of the catastrophic floods that hit the country. Insisting that whenever such a conversation takes place, it would be on Pakis­tan’s own terms, he said that he … END_OF_DOCUMENT_TOKEN_TO_BE_REPLACED No ‘debt swap’ talks with Beijing yet, says Bilawal →