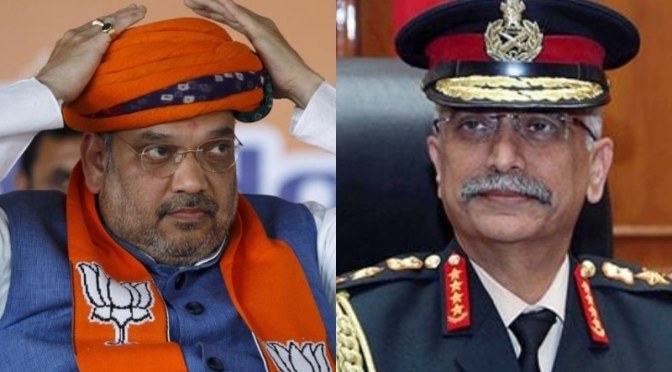 A London-based law firm filed an application with British police on Tuesday seeking the arrest of India’s army chief and a senior Indian government official over their alleged roles in war crimes in Indian-occupied Kashmir (IoK).

The law firm’s report was based on over 2,000 testimonies taken between 2020 and 2021. It also accused eight unnamed senior Indian military officials of direct involvement in war crimes and torture in IoK.

India’s Foreign Ministry said it was not aware of the report and refused to comment. The Ministry of Home Affairs also did not comment.

“There is strong reason to believe that Indian authorities are conducting war crimes and other violence against civilians in Jammu and Kashmir,” the report states, referring to territory that is part of the Himalayan region.

The request to London police was made under the principle of “universal jurisdiction” which gives countries the authority to prosecute individuals accused of crimes against humanity committed anywhere in the world.

The international law firm in London said it believes its application is the first time that legal action has been taken abroad against Indian authorities over alleged war crimes in IoK.

Hakan Camuz, director of international law at Stoke White, said he hoped the report would convince British police to open an investigation and ultimately arrest the officials when they set foot in the UK. Some of the Indian officials have financial assets and other links to Britain.

“We are asking the UK government to do their duty and investigate and arrest them for what they did based on the evidence we supplied to them. We want them to be held accountable,” Camuz said.

The police application was made on behalf of the family of Zia Mustafa, a jailed Pakistani freedom fighter whom Camuz said was the victim of an extrajudicial killing by Indian authorities in 2021, and on the behalf of human rights campaigner Muhammad Ahsan Untoo, who was allegedly tortured before his arrest last week.

In 2018, the UN human rights chief called for an independent international investigation into reports of rights violations in Kashmir, alleging “chronic impunity for violations committed by security forces”.

India’s government has denied the alleged rights violations and claims such claims are “separatist propaganda” meant to demonize Indian troops in the region.

The law firm’s investigation suggested that the abuse has worsened during the coronavirus pandemic.

Its report also included details about the arrest of Khurram Parvez, the region’s most prominent rights activist, by India’s counterterrorism authorities last year.

Parvez, 42, worked for the Jammu and Kashmir Coalition of Civil Society, which has written extensive reports about Indian troops’ use of violence and torture.

Other accounts in the report discuss journalist Sajad Gul, who was arrested earlier this month after he posted a video of family members and relatives protesting the killing of a freedom commander.

Human rights lawyers have increasingly used the universal jurisdiction principle to seek justice for people who were unable to file criminal complaints in their home countries or with the International Criminal Court, located in The Hague.

Last week, a German court convicted a former Syrian secret police officer of crimes against humanity for overseeing the abuse of thousands of detainees at a jail near Damascus a decade ago.

Camuz said he hoped the request to British police seeking the arrest of Indian officials will be followed by other legal actions also focusing on IoK.

“We are sure this is not going to be the last one, there will probably be many more applications,” he said. 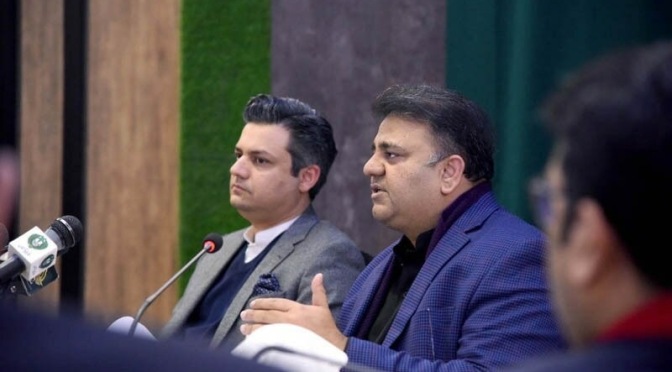 ISLAMABAD: Following an uproar over the passage of controversial bills in the National Assembly, the Pakistan Tehreek-i-Insaf (PTI) on Tuesday appeared to extend an olive branch to the opposition, inviting it to sit down and discuss all matters of national importance.

“We want to engage the opposition on important national issues like electoral and judicial reforms and the appointment of the National Accountability Bureau (NAB) chairman,” Informa­tion and Broadcasting Minister Fawad Chaudhry told a press conference after a meeting of the federal cabinet.

Minister for Energy Hammad Azhar also attended the press conference. Mr Chaudhry said he, National Assembly Speaker Asad Qaisar and the prime minister himself had invited the opposition to negotiate on these three issues.

However, he said the opposition was only interested in hatching conspiracies and trying to topple the government, despite constant efforts to engage them on the government’s reform agenda.

Fawad says govt willing to talk to opposition on issues such as electoral, judicial reforms, appointment of NAB chief

Interestingly, the opposition had shown its willingness to sit down with the government, provided the prime minister himself participated in the negotiations. However, Mr Chaudhry categorically said on Tuesday that PM Khan would not sit with any opposition leader, including Leader of the Opposition in the National Assembly Shehbaz Sharif.

During the press briefing, the ministers also spoke about the State Bank of Pakistan (Amendment) Bill 2021 — one of the two contentious pieces of legislation that are necessary to ensure that Pakistan’s sixth review of the $6 billion Extended Fund Facility gets cleared by the International Monetary Fund’s (IMF) executive board.

The bill was passed last week by the National Assembly during a session that lasted nearly until midnight, amid fierce objections from the opposition benches.

Energy Minister Azhar said the opposition had attempted to make the bill controversial, adding that the legislation was aimed at granting autonomy to the SBP, and drew parallels between Pakistan and developed countries.

Briefing the media on other decisions taken in the cabinet meeting, chaired by Prime Minister Imran Khan, the government’s chief spokesperson also said they would comply fully with the Islamabad High Court (IHC) decision to seal and raze the naval golf course located on Margalla Hills National Park land.

He said the cabinet had discussed the issue of encroachment of protected land by naval authorities. On Jan 11, the IHC had ordered the golf course to be razed within four weeks unless an environmentally-friendly use could be found for it.

Earlier, on Jan 7, the court had ruled the navy’s sailing club and farm houses “trespassed on the land situated on the embankment of Rawal Lake” and ordered them to be razed as well.

During a hearing on Monday, an IHC bench had also sought a compliance report from the cabinet secretary on the order to place the judgement in this case before the federal cabinet.

Talking about other decisions taken in the cabinet meeting, he said the National Assembly and Senate secretariats had been asked to avoid nominating members that have a conflict of interest, to various parliamentary committees.

“It has been observed that contractors and builders became members of committees on communications, and those owning information technology firms joined the committees concerning IT,” he said.

“This means that a member associated with a certain industry should not be included in standing committees pertaining to that particular industry,” he explained.

Mr Chaudhry also said the Ministry of Industries and Production briefed the meeting about urea production and its availability in the country.

The cabinet also okayed the reconstitution of the board of directors of Railway Construction Pakistan Limited, while the annual report of the National Electric Power Regulatory Authority was also presented before it. This is the first time in 24 years that the report has been presented on time.

Former United States President George W. Bush mistakenly described the invasion of Iraq as “brutal” and “unjustified” before correcting himself to say he meant to refer to Russia’s invasion of Ukraine. Bush made the comments in a speech during an event in Dallas on Wednesday, while he was criticising Russia’s political system. “The result is … END_OF_DOCUMENT_TOKEN_TO_BE_REPLACED

Reuters: More than 500,000 people have fled their homes in India’s northeastern state of Assam to escape heavy floods triggered by pre-monsoon rains that drowned seven, authorities said on Wednesday, as they warned the situation could worsen. One of the world’s largest rivers, the Brahmaputra, which flows into India and neighbouring Bangladesh from Tibet, burst … END_OF_DOCUMENT_TOKEN_TO_BE_REPLACED

The government began talks with the International Monetary Fund (IMF) on Wednesday over the release of crucial funds, a process slowed by concerns about the pace of economic reforms in the country. Pakistan has repeatedly sought international support for its economy, which has been hit by crippling national debt, galloping inflation and a plummeting rupee. … END_OF_DOCUMENT_TOKEN_TO_BE_REPLACED