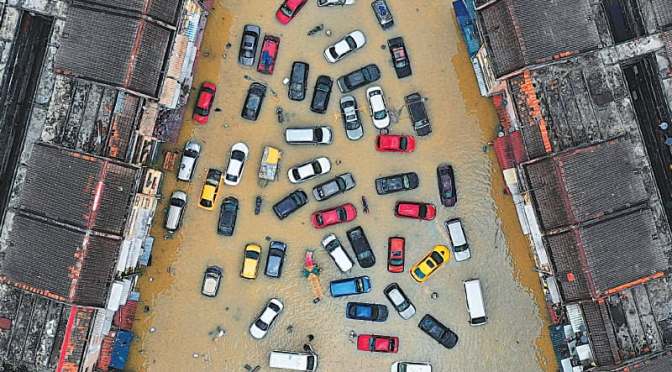 SHAH ALAM: The Malaysian military used boats on Tuesday to distribute food to desperate people trapped in their homes after massive floods, as the death toll rose to 14 with over 70,000 displaced.

Days of torrential rain triggered some of the worst floodings in years across the country at the weekend, swamping cities and villages and cutting off major roads.

Selangor — the country’s wealthiest and most densely populated state, encircling the capital Kuala Lumpur — is one of the worst-hit areas.

Some parts of the state capital Shah Alam were still underwater on Tuesday, and military personnel in boats distributed food to people stuck in their homes and government shelters.

Kartik Subramany fled his house as floodwaters rose, and took refuge in a school for 48 hours before being evacuated with his family to a shelter.

“My house is totally damaged, my two cars are wrecked,” the 29-year-old said.

“These are the worst floods of my entire life. The federal government has failed the people miserably — it has failed in its primary function to protect and safeguard lives.” He is among a growing number attacking what they say is a slow and inadequate official response.

Thousands of emergency service and military personnel have been mobilized, but critics say it is not enough and volunteers have stepped in to provide food and boats for the rescue effort.

A journalist in one hard-hit Shah Alam neighborhood saw people desperate for food snatching items from a devastating supermarket.

Prime Minister Ismail Sabri Yaakob admitted on Tuesday there were “weaknesses” in the response to the disaster and pledged there would be improvements in the future.

“The responsibility is not that of the federal government alone, but also the state governments,” he added, noting a month’s rainfall had come down in a single day in Selangor.

“No early warning of the torrential rain was given,” she said. “It is so sad lives have been lost.” Opposition politicians have accused the government of ignoring their calls to better prepare for the monsoon season, from November to February, particularly by improving drainage in densely populated urban areas.

On Tuesday, the death toll from the floods rose to 14, including eight in Selangor and six in the eastern state of Pahang, official news agency Bernama reported.

But with reports of people still missing, it is expected to increase. More than 71,000 people have been forced from their homes due to the floods, including 41,000 in Pahang and 27,000 in Selangor, according to official data.

Evacuees are being housed in government relief centers but officials have warned to expect a rise in coronavirus cases linked to the crowded shelters. The rain has stopped and in many areas floodwaters have receded, leaving residents to count the cost.

“I’ve been doing business for more than 24 years… this has never happened before,” said Mohammad Awal, whose cosmetic shop outside Kuala Lumpur was flooded.

The Southeast Asian nation is hit by floods annually during the monsoon season, but those at the weekend were the worst since 2014 when over 100,000 people were forced from their homes.

Global warming has been linked to worsening floods. Because a warmer atmosphere holds more water, climate change increases the risk and intensity of flooding from extreme rainfall. 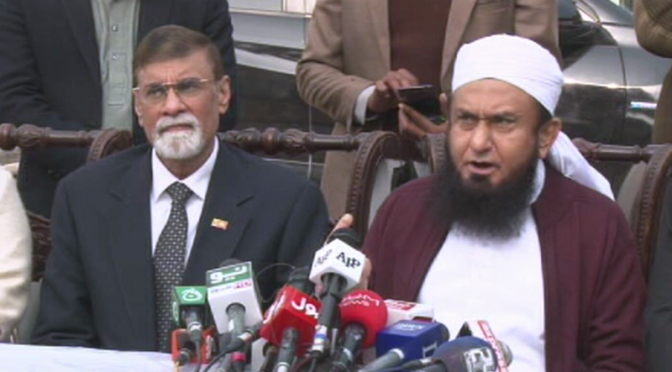 Renowned religious scholar Maulana Tariq Jamil on Wednesday met Sri Lankan High Commissioner Mohan Wijewickrama and expressed grief at the lynching of Sri Lankan national Priyantha Kumar by a charged mob in Sialkot earlier this month, saying that the nation was “ashamed” at the act of “cruelty”.

Kumara, a senior manager at a factory in Sialkot, was tortured to death on Dec 3 by hundreds of protesters, including the factory employees, and his body was later burnt over allegations of blasphemy. The brutal killing drew widespread condemnation from political circles and human rights bodies.

A first information report was registered against 900 workers of Rajco Industries on the application of Uggoki Station House Officer Armaghan Maqt under sections 302, 297, 201, 427, 431, 157, 149 of the Pakistan Penal Code and 7 and 11WW of the Anti-Terrorism Act. Scores of suspects have been rounded up by law enforcers since then.

Sitting alongside Wijewickrama and Special Representative to the Prime Minister on Religious Harmony Hafiz Mohammad Tahir Ashrafi at the Sri Lankan Embassy in Islamabad today, Jamil said no one except the Almighty Allah had the right to burn anyone. “It was [an act of] cruelty that what our people committed”.

“I told the [Sri Lankan] high commissioner that we are here to say sorry,” the cleric said, adding “I beg people to read the Holy Quran”.

Jamil said that as per the Holy Quran, killing of an innocent person was tantamount to killing the entire humanity.

Meanwhile, Ashrafi said that the educational expenses of the slain Sri Lankan national Kumara’s children would be borne by the factory owners for whom he worked, while the man who has replaced him was also a Sri Lankan.

“We are thankful to the Sri Lankans that in this atmosphere of fear, one of them chose to work here,” he added.

Kumara’s lynching has been widely condemned in Pakistan’s religious circles.

On Dec 7, days after the incident, clerics from various schools of thought had visited the Sri Lankan Embassy in Islamabad and unanimously condemned the lynching of Kumara, calling it “un-Islamic” and extrajudicial” as they demanded that strict legal action be meted out to those responsible.

The clerics had also issued a joint statement with Chairman Council of Islamic Ideology Dr Qibla Ayaz saying, “It was an inhumane act, and to accuse someone of blasphemy without proof is not in accordance with the Shariah.”

“The strictest possible legal action must be taken against these miscreants,” he had said. 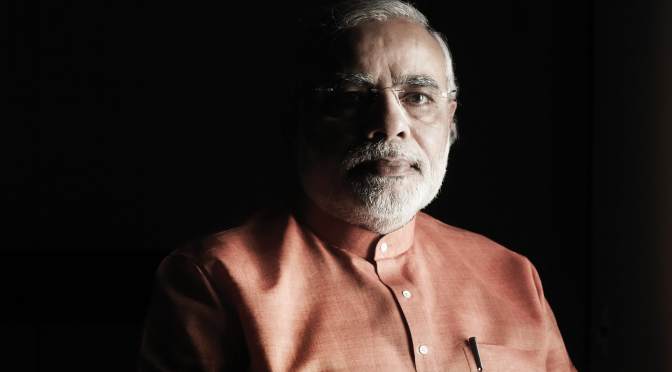 The New Face of India Is the Anti-Gandhi

The violence, insecurity, and rage of Narendra Modi.

Modi cannot be held solely responsible for such rage and despair, even if he amplifies it.

His supporters, at home and in the West, the West itself, which chooses to ignore the violence in India, and a complaisant liberal intelligentsia, concerned more with its career prospects than with standing up to Modi, have to share the responsibility.

There is also much continuity between Modi’s India and what preceded it, including the way in which the Congress stood aside during the 2002 massacres and their aftermath, selectively exploiting the culpability of Modi and his government but never genuinely interested in justice; nurturing Hindu majoritarianism under the guise of nationalism; promoting the enrichment of a select few.

From this hollowed-out form of success, bereft of love, spirituality, and justice, meaning can only emerge from banality and hatred.

Modi’s contradictions and lies channel the confusions of his supporters perfectly. In a manner reminiscent of the vanguards of China’s Cultural Revolution.

they accuse the old elites of holding back the nation and the culture from true greatness. They attack those responsible for the ruined past, the uncertain future, and the endless present.

They assail the “anti-nationals” who stand in their way, beating and molesting people while shouting, “Bharat Mata Ki Jai.” They demand people say it to prove they are not traitors, emboldened by a meeting of the BJP in March, led by Modi, that declared a refusal to use the slogan as tantamount to disrespecting the Indian constitution.

They hammer, with swords and guns and smartphones and double-digit growth, at the doors of the beef-eaters, the environmentalists, the university students, the feminists, the Dalits, the leftists, the dissenting writers, the skeptics, the “anti-nationals”—anyone who will not declare, both fists clenched, “Bharat Mata Ki Jai!” They have a rage that must burn itself out, and all that stands between them and the ashes of their rage is the astonishing, amazing phenomenon of a world that can still produce, from the crushed bottom layers of Indian society, people who, with every bit of the dignity and courage they can muster, resist the lure of their silent, lonely, aloof, admired, and unloved leader

The Indian Charge d’Affaires (Cd’A) in Islamabad was called to the Ministry of Foreign Affairs today and conveyed Government of Pakistan’s unequivocal rejection of India’s illegal and unilateral actions of 5 August 2019 in Indian Illegally Occupied Jammu & Kashmir (IIOJK), which breached international law, UN Charter and the 4th Geneva Convention as well as … END_OF_DOCUMENT_TOKEN_TO_BE_REPLACED

Al Qaeda leader Ayman al-Zawahiri was killed in a US strike in Afghanistan over the weekend, American President Joe Biden said on Monday. Zawahiri, an Egyptian surgeon who had a $25 million bounty on his head, helped coordinate the Sept 11, 2001, attacks that killed nearly 3,000 people. US officials, speaking on the condition of … END_OF_DOCUMENT_TOKEN_TO_BE_REPLACED

WASHINGTON: Former US president Donald Trump returned to the US capital this week and delivered a speech that’s being interpreted as his first for the 2024 election campaign. “As Trump speaks in Washington, his allies prepare for a second term,” The Washington Post reported. “Trump supporters are already working on a government-in-waiting if he wins re-election in … END_OF_DOCUMENT_TOKEN_TO_BE_REPLACED