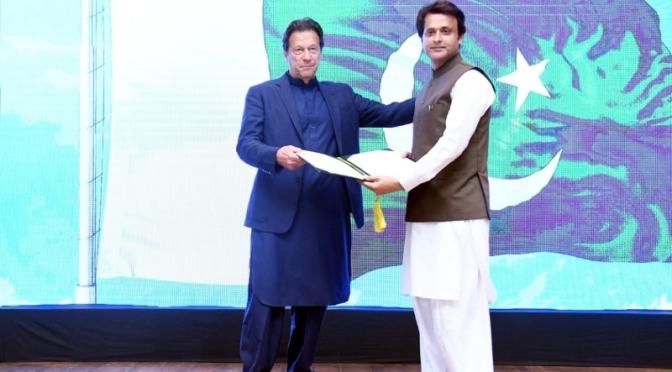 Prime Minister Imran Khan on Tuesday categorically said that the government will not spare those who resort to violence in the name of Islam or the Holy Prophet (Peace Be Upon Him).

The premier made the comments while addressing a condolence reference for Sri Lankan national Priyantha Kumara, who was lynched to death by a mob in Sialkot last week, at the Prime Minister’s Office in Islamabad.

Members of the federal cabinet also attended the event, which was held in solidarity with Kumara’s family and the Sri Lankan nation and government. The premier also laid a floral wreath on a portrait of Kumara.

A certificate of appreciation was also awarded to Malik Adnan — Kumara’s colleague who had tried to save his life. PM Imran had taken notice of the brave attempt and lauded Adnan’s “moral courage and bravery” on Sunday. He had also announced that Adnan would be honored with the Tamgha-i-Shujaat.

The event began with the recitation of the Holy Quran. A short documentary promoting religious harmony among all faiths was also played.

Addressing the somber event, the premier lauded Adnan’s bravery and said that it was heartening to see that a person tried to save another by risking his own life.

“Role models are important in the country because people follow them,” he said, adding that “moral power is greater than physical power”.

“I am sure our youth will remember the way Malik Adnan stood up against those beasts,” he said.

The premier also lamented the fact that people were killing others in the name of religion. “Prophet (PBUH) preached peace […] he taught us peace and justice,” he said. Justice is meted out in a humane society, but there is no rule of law in a society of animals, he said.

The premier said that people were killing others in the name of religion. “If someone accuses a person of blasphemy, the victim rots in jail and no lawyer or authority comes to his defense to see what actually transpired.

“Everyone is afraid of it. In fact, lawyers do not come forward and judges also refuse to listen to the cases.”

Commenting on the Dec 2014 attack on the Army Public School Peshawar, PM Imran said that the horrific incident had united the nation which had resolved to end terrorism. “After the Sialkot incident, the whole nation has decided that we will not let such a thing happen again.”

PM Imran said that the business community in Sialkot had informed him that they had collected $0.1 million for Kumara and that his family would continue to receive his monthly salary.

The prime minister said that he had established the Rehmatul-lil-Alameen Authority so that the entire nation could follow in the footsteps of Holy Prophet (PBUH) and so that the ulema could spread his teachings.

“But we are heading in a different direction,” he said as he called on the nation to read up on the life of the Holy Prophet (PBUH).

“Our country is the only one that was built in the name of Islam. But this incident has brought us embarrassment,” he said, adding that he received many messages from those living abroad.

“People who are based overseas do not know what Islam is, and they distance themselves from the religion after seeing such incidents take place.”

PM Imran also said that the Sialkot tragedy was highlighted in India in an effort to defame Pakistan. “Their TV programs called this incident a routine occurrence in Pakistan, which is unjust,” he said, adding that he would not allow such incidents to happen as long as he was alive.

Concluding his speech, the premier once again paid tribute to Adnan. “It was painful to see what the mob did [to Kumara]. But seeing Adnan restored our faith in humanity.”

He added that Adnan would be given the Tamgha-i-Shujaat on March 23.

A mob comprising hundreds of protestors, including the employees of the factory Kumara was the manager of, had tortured him to death on Friday and later burnt his body over blasphemy allegations.

A first information report was registered against 900 workers of Rajco Industries on the application of Uggoki Station House Officer (SHO) Armaghan Maqt under Sections 302, 297, 201, 427, 431, 157, 149 of the Pakistan Penal Code and 7 and 11WW of the Anti-Terrorism Act.

The incident was followed by national outrage across the country, which led to calls and reassurances for retribution and justice from government officials. Kumara’s remains were repatriated to Sri Lanka on Monday with state honors.

In videos of the incident shared on social media, Malik Adnan was seen trying to calm the mob down and later shielded Kumara when the matter escalated, but in vain. The workers overpowered Adnan and dragged the Sri Lankan national out on the road.

The Chinese capital showed tentative signs of a return to normal on Thursday after a sudden reversal of a hardline pandemic policy that hammered the world’s second-biggest economy and ignited rare protests. Beijing’s National Health Commission (NHC) on Wednesday announced a nationwide loosening of its zero-Covid restrictions, reducing the scope of mandatory testing, allowing some positive cases … END_OF_DOCUMENT_TOKEN_TO_BE_REPLACED