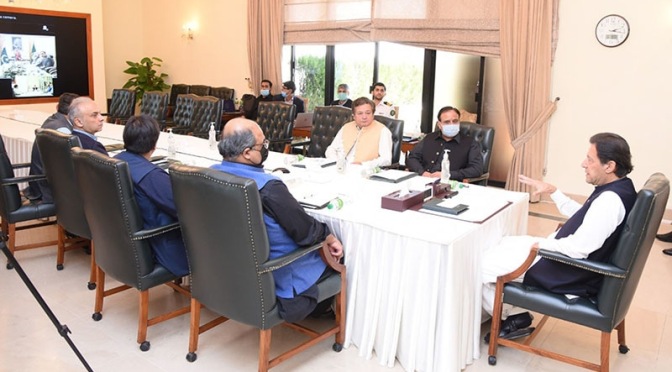 “The state will take strict action against the profiteers who were the enemies of the poor masses,” Mr Khan said while chairing a review meeting on sale price and hoarding of sugar.

The PM directed the authorities concerned to make strict legislation against sugar hoarders and profiteers and ensure implementation of track and trace system of sugar mills to ascertain the production volume of the commodity.

The chief secretary apprised the participants that all district administration had been directed to monitor if sugar was being sold at the price fixed by the government. The process of legislation against hoarders and profiteers was also in progress, he said.

He disclosed that closed-circuit television (CCTV) cameras had been installed at sugar mills to keep an eye on the quantity of sugarcane and sugar produce entering and leaving the mills. Besides, data would also be obtained from sugar mills on a daily basis during the crushing season, he added.

Earlier, the premier launched the Kisan Portal, a special category for farmers in the Pakistan Citizen Portal, expressing the hope that it would give a voice to small farmers.

At the launch, Mr Khan blamed the previous rulers for not building dams and lack of research in agriculture with the result that Pakistan lagged behind many countries in producing the required agro products. “Pakistan has reduced its research spending in the past, and the countries who had invested in research saw increased agricultural productivity. As long as you don’t do research, participate in seed development, how will your productivity increase,” he added.

The prime minister also lamented that Pakistan did not work on building reservoirs and dams, which could have helped farmers get more water for irrigation. There was a lot of uncultivated land in Pakistan that could be made use of, he remarked.

“We have a lot of land lying unattended. But we didn’t have water and never thought of it. Now big dams are being built after 50 years. We are building dams and you will see we will give more water to farmers. It can also stop the destruction from floods,” Mr Khan said.

Talking about the situation of farmers in the country, the premier said that all research pointed to how small farmers paid the highest prices when buying something from the market but sold their crop at the lowest price compared to those with major land holdings.

“Farmer used to work hard and take his sugarcane to sugar mills. He would be defeated from both sides — first they (sugar mills) made farmers wait in long lines. When I travelled in winter, trucks used to be queued outside sugar mills and they would get low prices,” he recalled.

“Ninety per cent farmers have small landholdings but their problems have never reached those in power,” he said.

The government, he said, had introduced Kisan Card to provide direct subsidy to farmers. Now a small farmer would get money directly through the Kisan Card, he announced.

Farmers also needed insurance, he said, adding that banks would be more than willing to give loans if the farmers’ crops were insured.

The prime minister admitted: “Our import bill has increased 53 per cent in one year. The pressure on the rupee increased because we imported 4m tonnes of wheat, we imported sugar and pulses and the [price of imported] palm oil nearly doubled.”

He said Pakistan was taking help from China to increase agricultural productivity as the agriculture sector was also made part of the China-Pakistan Economic Corridor (CPEC).

“The most expensive and nutritious vegetable, Avocado, is being sold for Rs600-Rs700 per piece here. Its tree starts giving fruit in four to five years. We have a lot of land for [planting avocado trees]. We have to [grow] new crops as our population increases.”

Discussing salient features of the portal, the premier said farmers would be able to directly call the chief secretary’s office with the help of Kisan Portal. According to the PM Office, 123 dashboards have been set up in relevant institutions at the federal and provincial level.