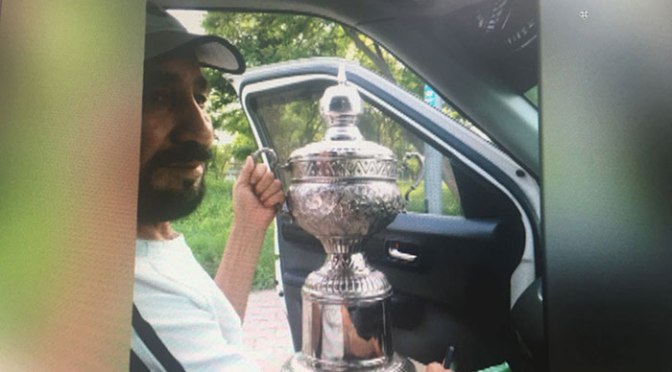 ISLAMABAD: Former Pakistan tennis player Gul Hamid is now selling his trophies in order to live an honourable living. The 68-year-old who has been playing tennis for the last 50 years won three ITF (International Tennis Federation) cups. Speaking to media on Tuesday, he said: “I took my cups to sell to Arif Sahib, at Pakistan Sports Board, as I had no choice.” Jobless and resources-less since over a decade, Hamid now lives with his second wife in a remote village Budhoo near Wah Cantt.

His first wife and children live in Karachi, whom he has to feed too. “I prefer death over insults at the hands of a landlord who knocks at my door asking for rent, which I have been managing through thick and thin until now,” he says. Hamid’s laurels include an ITF hat-trick from 2008 to 2010, the 1986 Oman Open and three gold medals for Pakistan Navy, where he served as a Petty Officer. “It was really an amazing day of my life when I beat Krishna Bhopatti of India in the Oman Open in 1986. It was a big victory amidst an international crowd of fifteen thousand,” he adds.

Hamid says Bhupatti, whose son Mahesh Bhupatti is currently an international tennis star even asked him to travel to India and train tennis players there. “I thanked Bhupatti for the offer and told him I need to train our children in Pakistan,” he said. Recalling his golden days through plastic coated newspaper clippings and commendations spread on a table,

“I am 68 now, and it’s probably the time for me and my wife to sit on Mussala (praying mat) and not running around for a living,” he added.