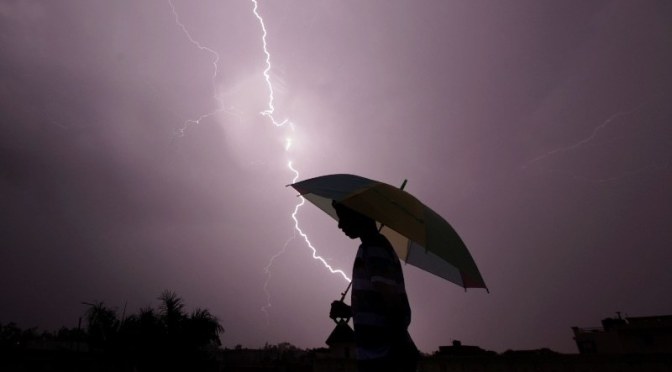 Lightning has killed at least 38 people across two Indian states over the past 24 hours, officials said on Monday.

A majority of the deaths occurred in the western state of Rajasthan, where 11 people died after being struck by lightning near a watchtower at the 12th century Amber Fort, police said.

Senior police officer Anand Srivastava said some of the victims were taking selfies near the watchtower when lightning struck late on Sunday.

Srivastava said at least nine more people were killed and nearly 20 others were injured in separate lightning strikes when the state was lashed with thunderstorms and monsoon rains.

In Uttar Pradesh, 18 people were killed by lightning on Sunday, said Manoj Dixit, a government official. Most of those killed were farm labourers working in fields.

Both state governments announced financial compensation for the families of the victims and those who were injured.

The Indian Meteorological Department has warned of more lightning in the next two days.

Lightning strikes are common during India’s monsoon season, which runs from June to September.

More than 2,900 people were killed by lightning in India in 2019, according to the the most recent official figures available.

Federal Information and Broadcasting Minister Fawad Chaudhry said on Monday that even if Afganistan descended into a civil war, the government would not let the fallout affect Pakistan.

“[We] are monitoring the changing situation in Afghanistan. [We are] trying our best for a way forward in Afghanistan through a peaceful regime that is [formed] on the basis of suggestions from all [stakeholders],” he added.

In another tweet in continuation of the previous one, the information minister recalled that Prime Minister Imran Khan had already clarified that Pakistan could be partners with the US in peace, but not in conflict.

Chaudhry added that the political and parliamentary leadership in Pakistan had agreed on the “principle of non-interference [in case of Afghanistan]”.

The information minister’s remarks are the latest in a string of statements by Pakistani authorities regarding growing concerns over rising violence in Afghanistan and its expected fallout in Pakistan, with the US drawdown in the war-torn country now in its final stages.

On Friday, Foreign Minister Shah Mahmood Qureshi and National Security Adviser Moeed Yusuf had warned while briefing the Senate Committee on Foreign Affairs that the situation was turning volatile in Afghanistan.

Yusuf had termed the situation in the neighbourng country “extremely bad and out of Pakistan’s control”. He had warned of an impending risk of an attack by Tehreek-i-Taliban Pakistan militants, who, he had said, could enter Pakistan disguised as refugees.

Qureshi had expressed worry that in case of a civil war in Afghanistan, Pakistan would not be able to handle the influx of refugees.

A day later, Inter-Services Public Relations Director General Maj Gen Babar Iftikhar had clarified that Pakistan was a facilitator of the Afghan peace process and not a guarantor.

In an exclusive interview with ARY News on the situation in Afghanistan, the ISPR chief had said there were a lot of aspects to the peace process.

“What I can say right now is that the peace process is at a critical stage and everybody understands that,” he had said, adding that Pakistan had tried to move the process forward with “sincerity”.

Earlier this month, Prime Minister Imran Khan had called newly elected Iranian President Seyed Ebrahim Raisi and expressed concern over the worsening security situation in Afghanistan, saying the latest developments could lead to serious repercussions for both Pakistan and Iran.

The prime minister had underscored the significance of a negotiated political solution to the conflict in the neighbouring country, and had said latest developments in Afghanistan could result in an influx of refugees towards the bordering areas of Pakistan and Iran..

According to an earlier Media report, Islamabad appears not in favour of opening its borders for refugees from Afghanistan and instead is ready to look into the ‘Iranian model’ if the situation demands.

The report cited Interior Minister Sheikh Rashid Ahmed as saying: “We have decided not to open our border for refugees; the aid agencies can help the needy on the other side too [in Afghanistan]. But, if the situation deteriorates, we will establish settlements along the border with strict control and monitoring, prohibiting the entry of refugees into the mainland.”

At present, there are two key border crossings between Pakistan and Afghanistan — Chaman in Balochistan and Torkham in Khyber Pakhtunkhwa — besides several small trading points. Most of the border with Afghanistan has been fenced, making illegal movement difficult.

During a more recent media talk, the interior minister had also expressed optimism regarding a political settlement in Afghanistan, saying that he believed that the “new, civilised Afghan Taliban” would prefer talks to guns after Afghanistan suffered violence, civil war and repeated invasions by foreign forces in recent decades.

“We have noted this latest development,” Chinese Foreign Ministry spokesperson Zhao Lijian told a media briefing China on Thursday voiced its opposition to India’s reported plans to hold the next year’s meeting of G-20 leaders in Jammu and Kashmir, echoing close ally Pakistan’s objection, and underlined that relevant sides should avoid “unilateral moves” that may “complicate” … END_OF_DOCUMENT_TOKEN_TO_BE_REPLACED

Every year, on 26 June, UN marks the International Day in Support of Victims of Torture, reminding the world to condemn torture and show solidarity with those suffering. The continued annexation of the Kashmir valley intensified after August 2019, when India revoked the special status of Jammu and Kashmir in its constitution. Over 800,000 security … END_OF_DOCUMENT_TOKEN_TO_BE_REPLACED

June 21 (Reuters) – Dmitry Muratov, the co-winner of the 2021 Nobel Peace Prize and the editor of one of Russia’s last major independent newspapers, auctioned off his Nobel medal for a record $103.5 million to aid children displaced by the war in Ukraine. All proceeds from the auction, which coincided with the World Refugee … END_OF_DOCUMENT_TOKEN_TO_BE_REPLACED