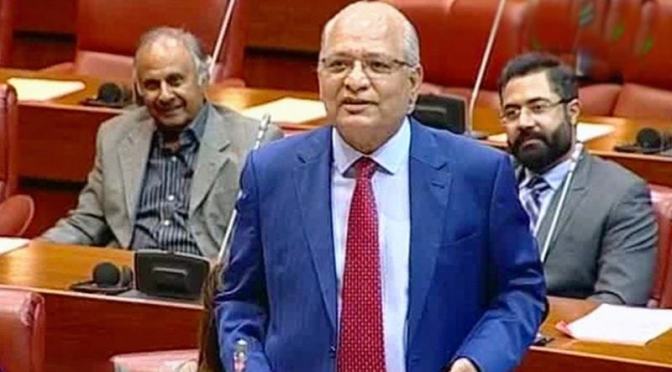 PML-N Senator Mushahidullah Khan passed away in Islamabad early Thursday morning at the age of 68, according to Radio Pakistan.

The cause of death was not immediately clear. Mushahidullah had been awarded a ticket by the PML-N to contest the upcoming Senate elections on a general seat.

The news was also confirmed by PML-N Vice President Maryam Nawaz. In a tweet, she prayed tribute to the senator’s services, calling him the “loyal and exceptional companion” of former premier Nawaz Sharif.

“I am shattered to hear the sad news. Will never be able to forget his fatherly affection and love. Huge, huge loss,” she said

Foreign Minister Shah Mahmood Qureshi expressed grief over the demise of the senator. In a statement, he said said Mushahidullah was a seasoned politician and a good human being. He also prayed for the departed soul, Radio Pakistan reported.

Senior PML-N leader Ahsan Iqbal said that the party had lost a “very brave, loyal and shrewd parliamentarian”. He offered prayers for the deceased..

MNA Mohsin Dawar said he was “deeply saddened” to learn of Mushahidullah’s passing. “It’s a huge loss. Our heartfelt condolences [go out to] his family and all PML-N workers,” he said.

An outspoken and aggressive PML-N loyalist, Mushahidullah was not a man known to mince words. He had no qualms about hitting his opponents below the belt and it seemed that this unflinching, aggressive loyalty is what endeared him to the Sharif brothers all these years.

Following the Oct 1999 coup staged by retired General Pervez Musharraf, when most of the Sharifs’ comrades-in-arms jumped ship and joined the king’s party, Mushahidullah chose to take on the military strongman head on.

Within 24 hours of General Musharraf taking over, on Oct 13, Mushahidullah convened a press conference where he was less than flattering about the newly-imposed military regime and summarily resigned from the two lucrative positions he held at the time; as administrator of the Karachi Metropolitan Corporation and as adviser to the Ministry of Labour and Manpower.

For his troubles, he was imprisoned and, by his own admission, had to endure several “atrocities” perpetrated by the military regime of the time.

Even though well-respected in party circles, his temper and lack of a filter when it came to making public statements often landed him in hot water. From quarrelling with fellow guests on TV talk shows to provoking opposition parliamentarians on the floor of the house, his fellow party leaders said that he seldom played nice.

Mushahidullah was a trusted aide of Nawaz ever since the latter was forced into exile. First appointed party information secretary and later made a senator in 2009, he also served as the party spokesperson for many years.

The new army chief on Saturday said the military was ready to defend “every inch of our motherland” if attacked, during a visit to the Line of Control (LoC). The visit came less than a week since General Asim Munir took charge as the 17th army chief of Pakistan at a ceremony held at the … END_OF_DOCUMENT_TOKEN_TO_BE_REPLACED

When the Muslim Ummah will follow the religious orders and the principles given by the Prophet ﷺ, Muslims will be the cause of love, brotherhood and unity in the whole world. Islam always teaches peace,said Ameer Abdul Qadeer Awan. He said, Today, even non-Muslims who have implemented the orders of Islam in their lives are … END_OF_DOCUMENT_TOKEN_TO_BE_REPLACED