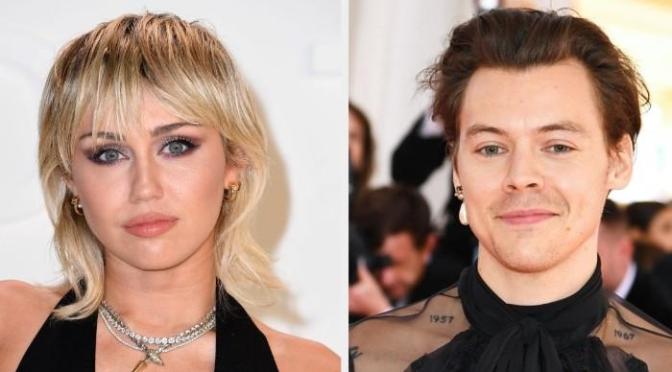 Even the most iconic fashion icons have taken inspiration from British singer Harry Styles’s sartorial choices.

The latest is Miley Cyrus who took a cue from the former One Direction member with her look for TikTok’s Tailgate Super Bowl pregame live stream with Billy Idol.

The Wrecking Ball hit maker flaunted her many stunning looks for the event which also included a black and pink cheerleading uniform and a matching jersey with football-esque pants.

However, the one look that became the talk of town was the one from before the show during rehearsal that reminded us of the glory of Harry Styles.

Wearing a Kermit green football jersey with denim cutoffs by Gucci’s Ouverture collection, Cyrus reminded fans of Styles as he wore the same but in pink during seven-part miniseries, Guccifest.

Check out their looks below:

PARIS, Jan 13 (Reuters) – Tens of thousands of French teachers angry with the government’s COVID-19 rules walked off the job on Thursday and took to the streets to demand better protection for pupils and staff against infection. “Stop your contempt,” and “We’re fed up with tests” teachers proclaimed on banners in rallies across France, … END_OF_DOCUMENT_TOKEN_TO_BE_REPLACED

NAROWAL: The Kartarpur Corridor reunites two brothers who separated 74 years ago amid chaotic partition. Muhammad Siddique, 80, and Habib, 78, separated 74 years ago at the time of partition. They hugged and cried and garlanded each other on the happy occasion of reunion. The Kartarpur administration distributed sweets. Siddique, a resident of Phugaran village … END_OF_DOCUMENT_TOKEN_TO_BE_REPLACED

The banned Tehreek-i-Taliban Pakistan (TTP) on Wednesday confirmed the death of senior leader Mufti Khalid Balti alias Mohammad Khurasani, whose killing in the eastern Nangarhar province of Afghanistan was revealed this week. The current TTP spokesman, who also shares the Mohammad Khurasani alias with Balti, confirmed his death in a statement but shared no details of how … END_OF_DOCUMENT_TOKEN_TO_BE_REPLACED