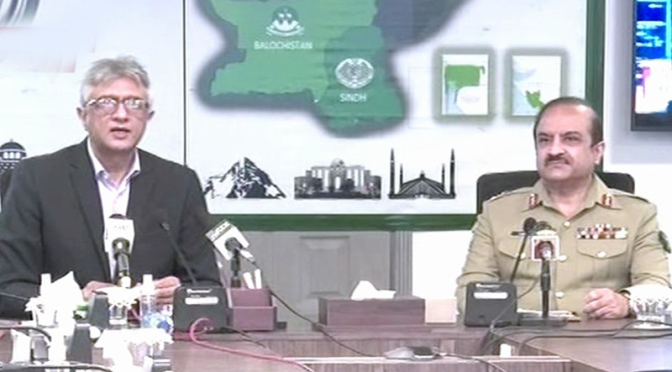 The National Command and Operation Centre (NCOC) on Tuesday announced the launch of phase 3 clinical trials in Pakistan for a potential vaccine being developed by China’s CanSino Biologics for the novel coronavirus.

Trials for phase 1 and 2 for the vaccine were held in China. Pakistan, under a public-private partnership between the National Institute of Health (NIH) and CanSino, is among the countries which will carry out phase 3, the NCOC statement said.

Planning, Development and Special Initiatives Minister Asad Umar said that 40,000 people will participate in the trial, which is being held in seven countries across the world. Around 8,000 to 10,000 of these will be from Pakistan, he said.

Maj Gen Ikram said it was an “honour” for the country that it was participating in the phase 3 trial of a vaccine for the first time.

“The entire world is looking towards a vaccine right now. There are seven vaccines for which trials are being conducted — three of them developed in China. This CanSino vaccine is based on recombinant technology in which an adino-vector is made deficient. The virus vector and cell culture has been procured from Canada,” he said.

Speaking about how the study is conducted, he said that in the pre-clinical phase, the vaccine is tried on animals. “This was done in China at the start of the year. It was safe and immunogenic.

“Then there is a phase 1 trial which was again conducted in China and its results were good. In this phase, the safety and efficacy [of the vaccine] on the human body is looked at.

“The phase 2 trial was conducted on 508 people — which is considered a big trial — and when the results were found to be good, [the study] was published in scientific journals,” he said.

He said phase 3 trial was the biggest and most difficult stage. “[The NIH] has accepted this challenge and we are grateful to the patronage of the NCOC and the Ministry of Health.”

He said that the trials have been launched from today and 8,000 to 10,000 volunteers would be inducted through a formal system.

The vaccine would be available in the market in five to six months once its results were analysed and it was approved, said Ikram.

“This is the vaccine that has already been approved and is being administered to army officials and policemen in China. Therefore, its safety is ensured,” he concluded.