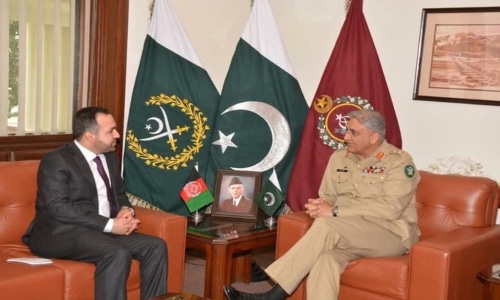 ISLAMABAD: With progress on the much-anticipated intra-Afghan talks again being impeded by familiar challenges, Afghanistan’s envoy to Pakistan Atif Mashal on Thursday reached out to Army Chief Gen Qamar Bajwa for a discussion on the peace process.

“Today I met with Pakistan COAS Gen Qamar Bajwa and discussed follow up of matters arising from his recent Kabul visit, Afghan peace process, upcoming APAPPS meeting, strengthening bilateral relations and the current situation in the region,” Mr Mashal tweeted after the meeting.https://platform.twitter.com/embed/index.html?dnt=false&embedId=twitter-widget-0&frame=false&hideCard=false&hideThread=false&id=1276096858008551424&lang=en&origin=https%3A%2F%2Fwww.dawn.com%2Fnews%2F1565226&siteScreenName=dawn_com&theme=light&widgetsVersion=3f79a62%3A1592980045844&width=550px

Gen Bajwa had on June 9 visited Kabul for assuring the Afghan leadership about Pakistan’s support for the Afghan peace process. His visit had taken place in the midst of progress towards the initiation of the intra-Afghan dialogue, which had raised hopes about the prospects of ending the 19-year-long conflict in Afghanistan.

However, lately the exchange of prisoners between Afghan government and the Taliban has once again slowed down. Kabul is still to release another about 1,250 of the agreed 5,000 insurgent fighters, while Taliban is to set free about 400 of the 1,000 captured Afghan security personnel.

Prisoner swap between the two sides has been taking place under the Doha agreement that was signed by the US and the insurgent group in February and is a prerequisite for the start of intra-Afghan talks.

The release of prisoners is a major issue that has been delaying the start of intra-Afghan negotiations, which were originally scheduled for March 10. Pakistan had facilitated the signing of the agreement.

Meanwhile, there has also been a sharp spike in violence in Afghanistan.

Chief of the Afghan High Council for National Reconciliation Abdullah Abdullah has warned that increased violence would damage the peace process.

“Where does it get us? If the current level of violence continues… and then the people leave Kabul [for Doha] in order to start talks [with the Taliban], but with the news of hundreds of people being killed recently, including civilians, that will not be a good environment for the start of negotiations,” Abdullah was quoted by VOA as having said.

The Afghan envoy later met Chairman of the Pakistan Peoples Party Bilawal Bhutto-Zardari at his residence in Islamabad, according to a statement by the political party.

The two, the PPP said, “discussed matters of mutual interests and exchanged thoughts on strengthening bilateral relationship between both countries”.

Mr Bhutto-Zardari said that the PPP always believed that a democratic, stable and peaceful Afghanistan was vital for peace and harmony in the region.

He called for greater cooperation between Afghanistan and Pakistan for peace, development and stability.