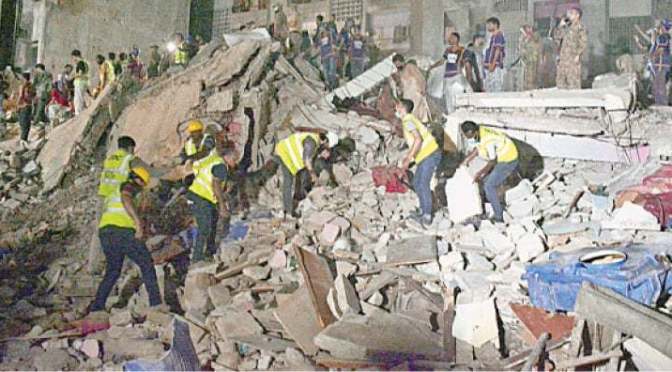 KARACHI: Scores of people suffered injuries and many were feared trapped inside after a five-storey residential building collapsed in Lyari’s Khadda Market area on Sunday evening, officials said.

Police said around eight families were living in the flats of the building.

A rescue operation was under way in the affected area till late into the night and local government officials, charity workers, police and Rangers were taking part in it. However, darkness and narrow lanes of the densely populated neighbourhood had made their work quite difficult.ARTICLE CONTINUES AFTER AD

The fresh incident came as a grim reminder of a similar tragedy that took place in March this year in Rizvia Society and claimed more than 20 lives.

It appears to be another case of negligence on part of relevant civic authorities and the Sindh Building Control Authority (SBCA).

“Just a day ago, the residents of the building started feeling that something was wrong with the structure,” Lyari MNA Abdul Shakoor Shad of the Pakistan Tehreek-i-Insaf told Dawn.

“They called the SBCA and the commissioner’s office with complaints that their building doesn’t look safe anymore and they need help. None of them responded and the people started planning to evacuate the building on a self-help basis. They were just in the phase of planning when all of sudden the building collapsed.”

“It’s the criminal negligence of Karachi commissioner and SBCA officials and both should be charged for this crime,” said Mr Shad.

Rescuers managed to pull out many people alive from under the rubble.

A senior police official on the scene said that the removal of debris with the help of heavy machinery was crucial, but narrow and congested lanes of the area had not allowed such initiative.

“However, we have still moved some machinery and contacted a few private contractors for the same purpose. We are trying our best to make them utilised,” said SP-Lyari Altaf Hussain, assessing that there were some eight families living in the ill-fated building.

Only on March 5, a multi-storey residential building in Rizvia Society met the same fate leaving over 20 dead including women and children. The incident had left so many questions about the role of the SBCA and the alleged rampant corruption in the regulatory organisation.

Though the police arrested and charged the builder without any credible action against the SBCA high-ups, the fresh episode of the building collapse brought the PPP-led Sindh government and PTI-nominated governor at loggerheads.

“The irresponsible and criminal negligence of the SBCA costing people their lives,” Sindh Governor Imran Ismail said in a statement while seeking immediate report from the Karachi commissioner on the incident. “The corruption of the SBCA is the key reason behind such incidents. This body needs extreme measures of reforms and revival.”

Sindh Local Government Minister Nasir Shah said in a statement that the victims of the Lyari building collapse would be provided complete support from the Sindh government.

He directed the municipal administration to join hands with the rescue organisation and law enforcement agencies in the relief operation and ensured a transparent enquiry against those responsible.