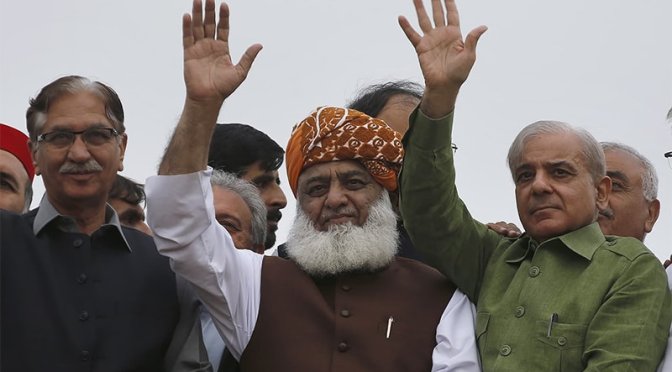 ISLAMABAD: Sticking to their earlier stance, the country’s two major opposition parties — the Pakistan Muslim League-Nawaz (PML-N) and Pakistan Peoples Party (PPP) — on Friday announced they would not become a part of the sit-in announced by Jamiat Ulema-i-Islam (JUI-F) chief Maulana Fazlur Rehman at the big public rally.

The leaders and office-bearers of the two parties said they had already told the Maulana in categorical terms that they would only attend the public meeting and would not support any sit-in.

They said they had not issued any specific directives to their workers and activists regarding participation in the sit-in.

“We came only for one day,” said PML-N secretary general Ahsan Iqbal while talking to Dawn.

Mr Iqbal, who also addressed the Azadi march participants with PML-N president Shahbaz Sharif, said even party’s supreme leader Nawaz Sharif had asked them to participate in the Azadi march for one day only.

Mr Iqbal, who was preparing to go to the residence of Maulana Fazl for a meeting of the heads of the opposition parties, said the PML-N workers had participated in the Azadi march and the public meeting with full enthusiasm. However, he said, the party had not given any call for a sit-in to its workers.

Similarly, PPP secretary general Farhatullah Khan Babar said his party leadership had made it clear during the multi-party conferences (MPCs) and the meetings of the Rehbar Committee that his party would not take part in an “indefinite dharna (sit-in).”

When told that so far it was only a two-day sit-in, Mr Babar said he could not make a comment on the matter as he was not aware of the step that would be taken by the JUI-F after expiry of the two-day deadline set by the Maulana for the resignation of Prime Minister Imran Khan.

When asked about the possibility of PPP’s participation in the sit-in if it was extended beyond Sunday (tomorrow), he said he could not make a comment without discussing the matter in the party.

Similarly, he refused to reply when asked to explain his party’s possible stance in case the JUI-F chief requested them for a “token participation” in the sit-in.

Mr Babar, however, said the plan of PPP chairman Bilawal Bhutto-Zardari to address public meetings in South Punjab was still intact. He said Mr Bhutto-Zardari was scheduled to fly to Rahim Yar Khan for a public meeting, but his aircraft could not take off due to bad weather.

He said taking advantage of the cancellation of his flight, the PPP chairman reached the Azadi march venue and addressed its participants along with other opposition leaders, including PML-N president Shahbaz Sharif.

Opposition parties’ Azadi march, which was spearheaded by the JUI-F, entered Islamabad on Thursday night. The decision of the JUI-F chief to keep his plans secret till the last moment not only kept the government and local administration of the capital perplexed, but it also came under criticism from key political allies.

Awami National Party president Asfandyar Wali Khan, who had arrived in Islamabad from Charsadda at the head of his party’s procession before the arrival of the JUI-F caravan, had complained about the lack of coordination among parties and even wondered where had the Rehbar Committee gone.

“We have noted this latest development,” Chinese Foreign Ministry spokesperson Zhao Lijian told a media briefing China on Thursday voiced its opposition to India’s reported plans to hold the next year’s meeting of G-20 leaders in Jammu and Kashmir, echoing close ally Pakistan’s objection, and underlined that relevant sides should avoid “unilateral moves” that may “complicate” … END_OF_DOCUMENT_TOKEN_TO_BE_REPLACED

Every year, on 26 June, UN marks the International Day in Support of Victims of Torture, reminding the world to condemn torture and show solidarity with those suffering. The continued annexation of the Kashmir valley intensified after August 2019, when India revoked the special status of Jammu and Kashmir in its constitution. Over 800,000 security … END_OF_DOCUMENT_TOKEN_TO_BE_REPLACED

June 21 (Reuters) – Dmitry Muratov, the co-winner of the 2021 Nobel Peace Prize and the editor of one of Russia’s last major independent newspapers, auctioned off his Nobel medal for a record $103.5 million to aid children displaced by the war in Ukraine. All proceeds from the auction, which coincided with the World Refugee … END_OF_DOCUMENT_TOKEN_TO_BE_REPLACED