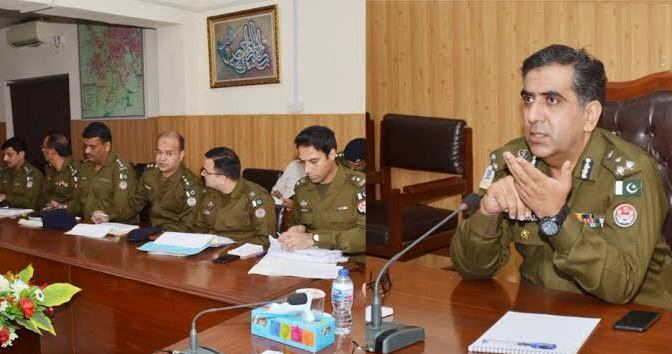 CPO Faisal Rana sought report on ongoing operation against Terror Groups, the operation cannot be left pending in any kind of situation either normal or unusual, arrest of top 10 and top 20 criminals shall be the parameter to gauge the performance of SHOs and SDPOs, the CPO expressed while addressing a high level meeting in police lines, which was attended by SSP Operations Tariq Walait, SSP Investigations Muhammad Faisal, SP Potohar Syed Ali, SP Saddar Rai Mazhar Iqbal, SP Rawal Asif Masood and other police officers concerned. CPO took comprehensive briefing regarding ongoing operation against Terror Groups from the divisional SPs and took information to the grass root level about the criminal activities of the Terror groups. The CPO was told that more than 03 dozen criminals, wanted in several heinous cases have been arrested during the operation so far. CPO Faisal Rana said that, the way citizens of Rawalpindi have expressed their satisfaction over the operation against Terror Groups is unprecedented in the history of Rawalpindi. The acknowledgement and appreciation that the social circles have given to Rawalpindi police for this “Operation against Terror” has boasted the morale and courage of the police to such an extent that for the establishment of rule of law, police is ready to face the Himalaya of crime, the CPO added. The CPO said that the operation must continue with the same spirit and police have to find the criminals even if they have hidden themselves in the depths of the plutonic. The CPO was told that SHO Aizaz Azeem and his team, under the close supervision of SP Potohar Syed Ali, arrested the shooters who used to do aerial firing in the political gatherings on payment and the political parties having different ideologies are delighted over their arrest. The Terror Groups had hijacked the social media in a sense that they used to upload the videos and pictures of their criminal acts on the social media but with the success of the “Operation against Terror” the criminals and their facilitators have disappeared from the social media. CPO Faisal Rana directed that the victims of the Terror Groups must be contacted and FIR must be registered on each criminal act.

Former United States President George W. Bush mistakenly described the invasion of Iraq as “brutal” and “unjustified” before correcting himself to say he meant to refer to Russia’s invasion of Ukraine. Bush made the comments in a speech during an event in Dallas on Wednesday, while he was criticising Russia’s political system. “The result is … END_OF_DOCUMENT_TOKEN_TO_BE_REPLACED

Reuters: More than 500,000 people have fled their homes in India’s northeastern state of Assam to escape heavy floods triggered by pre-monsoon rains that drowned seven, authorities said on Wednesday, as they warned the situation could worsen. One of the world’s largest rivers, the Brahmaputra, which flows into India and neighbouring Bangladesh from Tibet, burst … END_OF_DOCUMENT_TOKEN_TO_BE_REPLACED

The government began talks with the International Monetary Fund (IMF) on Wednesday over the release of crucial funds, a process slowed by concerns about the pace of economic reforms in the country. Pakistan has repeatedly sought international support for its economy, which has been hit by crippling national debt, galloping inflation and a plummeting rupee. … END_OF_DOCUMENT_TOKEN_TO_BE_REPLACED