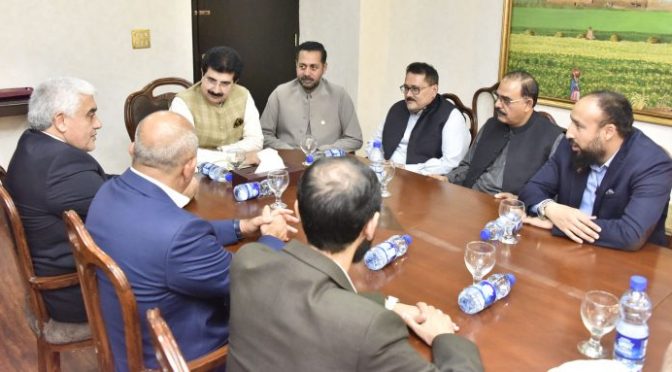 ISLAMABAD: Chairman Senate Muhammad Sadiq Sanjrani has invited the Turkish businessmen to invest in Gwadar free economic zone and benefit from the economic potential of the development activities in the country.

He expressed these views while talking to a delegation of Turkish businessmen including parliamentarians. Chairman Pakistan Turkey Friendship Group in Senate Senator Talha Mehmood and Secretary Senate Amjed Pervez Malik were also present in the meeting.

He said that Asian Parliamentary Assembly (APA) meeting is scheduled to be held during the last week of October in Gwader. Turkey is current President of APA and we would appreciate the participation of delegates from Turkey including the parliamentarians and businessmen.

He said that both the countries have supported each other on international fora and we are hopeful that parliamentary relations would further enhance the people to people contacts. He said that the parliamentarians on the both sides should benefit from the forum of friendship groups in respective parliaments towards enhancing the bilateral economic and social ties.

Speaking on the occasion Senator Talha Mehmood, Chairman Pakistan Turkey Friendship Group in the Senate apprised that he recently visited Syrian refugee camp on the boarder of Turkey on the eve of Eid and sloughed more than 700 hundred animal including sheep for the refugees.

The head of delegation apprised the Senate Chairman about the problems being faced due to Syrian refugees’ issue. He said that Turkey and Pakistan are not geographically connected but our hearts are very close to each other that is why historically we are called two countries and one nation.

The head of delegation apprised the Chairman Senate that they have held meetings with Ansar Aziz, Mayor Islamabad, Secretary Incharge BOI and other high ranking government functionaries to explore possibilities of investment and cooperation in different sectors.

SRINAGAR: Indian forces killed six fighters in occupied Kashmir over the past 24 hours while the fighters shot dead a female TV performer and a police officer, officials said on Thursday, following the conviction of the region’s best-known leader. A New Delhi court on Wednesday ordered life in jail for Yasin Malik for funding “terrorist” … END_OF_DOCUMENT_TOKEN_TO_BE_REPLACED

Pakistani activist and entrepreneur Tanzila Khan has been awarded the Amal Clooney Women’s Empowerment Award winner at The Prince’s Trust Awards 2022 for her work on increasing women’s access to menstrual, pregnancy and reproductive health products. Human rights attorney Amal Clooney joined Prince Charles to present the award to her. Khan, who uses a wheelchair, … END_OF_DOCUMENT_TOKEN_TO_BE_REPLACED

Former United States President George W. Bush mistakenly described the invasion of Iraq as “brutal” and “unjustified” before correcting himself to say he meant to refer to Russia’s invasion of Ukraine. Bush made the comments in a speech during an event in Dallas on Wednesday, while he was criticising Russia’s political system. “The result is … END_OF_DOCUMENT_TOKEN_TO_BE_REPLACED