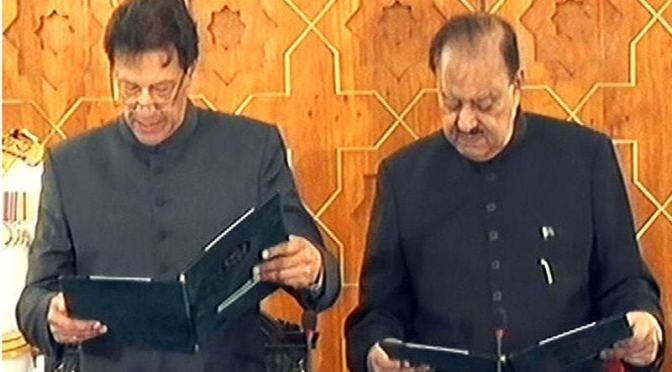 PM-elect Imran Khan on Saturday took oath as the 22nd prime minister of Pakistan at a ceremony held at the President House.

Khan, who outvoted opposition and PML-N candidate Shahbaz Sharif in the PM’s election on Friday, was administered his oath by President Mamnoon Hussain.

As the ceremony concluded, Khan proceeded to the Prime Minister’s Office, where he was presented a guard of honour.

The oath-taking ceremony, which was scheduled to begin at 9:30am, started a little after 10am.

Clad in a black sherwani, the prime minister-elect arrived at the Aiwan-e-Sadr (the President House) in Islamabad from his Banigala residence. His wife Bushra Imran had already arrived for the ceremony.

The ceremony commenced with the national anthem, followed by recitation of verses from the Holy Quran.

The invited guests, which include politicians, cricketers and celebrities, were told to be at the venue at 9:15am. The event was scheduled to begin at 9:30am.

Khan, who famously captained the national cricket team to World Cup glory in 1992, has also invited some of his former teammates to witness his formal ascension to the top ministerial job in the country.

According to the programme outlined on the invitation cards, the ceremony will begin with the national anthem, following which the cabinet secretary will seek permission from the president to commence the ceremony.

Next up will be recitation (tilawat) of the Holy Quran, after which the oath will be administered and documents signed.

The guest have been asked to carry their NIC or accreditation cards but not to bring with them any handbags, purses, mobiles phones or any other electronic gadgetry.

After the Pakistan Tehreek-e-Insaf (PTI) emerged as the biggest parliamentary party in the wake of the July 25 polls, all 120 of the party’s parliamentary committee members rubber-stamped Khan’s candidacy for the post of the prime minister.

The party formed enough alliances and recruited enough independents to gain the numbers required to get Khan elected as the PM in Friday’s parliamentary vote.

Khan and his party campaigned on promises to end widespread graft while building an “Islamic welfare state”.

“First of all, we will start strict accountability. I promise to my God that everyone who looted this country will be made accountable,” he said in his speech as PM-elect on Friday.

PTI candidates were also voted speaker and deputy speaker of the National Assembly this week, putting Khan in a strong position to carry forward his legislative agenda.

He will face myriad challenges including militant extremism, water shortages, and a booming population negating growth in the country, among others.

Most pressing is a looming economic crisis, with speculation that Pakistan will have to seek a bailout from the International Monetary Fund.

Khan will also have to contend with the same issue as many predecessors: how to maintain a power balance in civil-military relations.

Srinagar, October 01 : In India illegally occupied Jammu and Kashmir, Indian troops in their unabated acts of state terrorism martyred seventeen (17) Kashmiris in the last month of September. According to the data issued by the Research Section of Kashmir Media Service, today, of those martyred ten (10) Kashmiris were killed in fake encounters. … END_OF_DOCUMENT_TOKEN_TO_BE_REPLACED

Laal Singh Chaddha is the latest film to face targeted attacks from anti-Muslim, Hindu-nationalist trolls who some claim are beginning to impact box office performance In August this year, a week after the release of Laal Singh Chaddha, Bollywood’s adaptation of Forrest Gump, a Twitter account with about 280,000 followers, tweeted: ​​“#Urduwood is trending. Thanks to … END_OF_DOCUMENT_TOKEN_TO_BE_REPLACED

KARACHI: Foreign Minister Bilawal Bhutto-Zardari said on Thursday that Islamabad had so far not requested a restructuring, deferment or swap of debt owed to China in the wake of the catastrophic floods that hit the country. Insisting that whenever such a conversation takes place, it would be on Pakis­tan’s own terms, he said that he … END_OF_DOCUMENT_TOKEN_TO_BE_REPLACED No ‘debt swap’ talks with Beijing yet, says Bilawal →