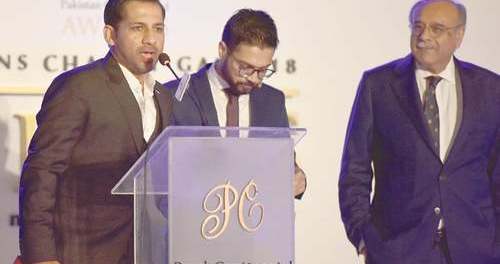 The affable Fakhar stole the limelight at the PCB’s Annual Cricket Awards ceremony, which was held in collaboration with Titans Autographs and Memorabilia, by paying glowing tribute to Saeed who scored a memorable 194 — a world record that stood for six years — from only 146 balls at Chennai in May 1997 during the Independence Cup clash which Pakistan won by 35 runs.

“There is no doubt in my mind that nobody can ever come close to matching that stupendous innings from Saeed bhai. It was a phenomenal achievement considering it came against India in sweltering conditions,” Fakhar said after receiving Rs2.5 million special award for the most outstanding performance during the ceremony held at a five-star hotel on Wednesday night.

“Records are there to be broken and centuries are scored every now and then but in my view there is no comparison between my innings [of 210 not out] in Bulawayo and the one played by Saeed bhai who I rate as one of the greatest one-day batsmen.”

Saeed Anwar, a left-hander like Fakhar, scored 8,824 runs (averaging 45.52) and hit 20 centuries in 247 ODIs in a glittering 14-year career before retiring after the 2003 World Cup in South Africa. He also made 4,052 runs in 55 Tests with 11 hundreds after bagging a pair on debut against the West Indies at Faisalabad in November 1990.

Fakhar is the quickest to the 1,000-run landmark in all ODIs, getting to the milestone in only 18 matches.

In a brief speech after receiving Rs1 million cash prize, Sarfraz held high hopes for Pakistan in a very busy season in the lead-up to next year’s ICC World Cup in England while lauding the contributions of his charges in ensuring Pakistan retain the top ranking in T20 Internationals.

While most of the awards were given on performance-based criteria, glaringly there were several dubious recipients on the night, while exposing the Pakistan Cricket Board’s credibility.

At least two of the award winners were far from merit. Asif Yaqoob, who only made his debut at the first-class level just a couple of seasons ago and already assigned to supervise more matches of the PSL 3 than Khalid Mahmood — widely rated among the best umpires in the country and one who has been officiating in top domestic competitions for 24 seasons now — was given the ‘Best Umpire’ award at the behest of Shakil Sheikh, the influential president of the Islamabad Cricket Association and a close aide of PCB chairman Najam Sethi.

The other choice was Azhar Hussain, who was awarded the best Scorer-of-the-Year despite being an average scorer while the credentials of several outstanding scorers, such as Arif Majeed Arif and Syed Imran Ali, were overlooked.

Meanwhile, auction of several cricketing memorabilia was conducted on the sidelines of the awards’ ceremony which drew scant response from the overcrowded audience, judging by the prices the items on offer were bought for.

The proceedings of the auctioned memorabilia were donated to Shahid Afridi Foundation, the Edhi Foundation and Project-91.