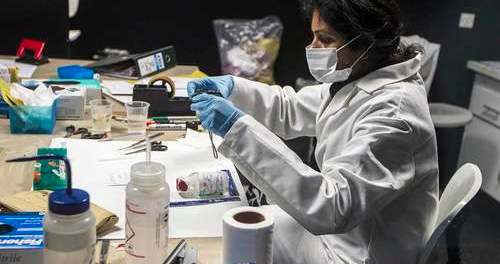 Observing the low rates of reported rapes in Pakistan, a recent Dawneditorial rightly points towards the gross “inadequacies of investigators and prosecutors…” as a key contributor to this issue.

The role of medical examiners holds immense importance in investigations for rape, since their report can often make or break the case.

Despite this, the investigational techniques utilised by our medicolegal system tend to rely upon crude, insensitive, and often brutal methods.

Newsreels of crime scenes being mobbed by curious onlookers, rescue volunteers, and reporters, the place being hosed down and precious evidence washed away or trampled on, is nothing new to us.

Our methods are unprofessional, to say the least, in sharp contrast to the meticulous, and methodical approaches being adopted by investigators that impress us on TV shows like CSI Miami.

Advancements in forensic investigations have come a long way but have yet to reach our shores.

The domain of the medical examiner unfortunately does not present a very rosy picture either. Medical forensic is an orphan specialisation in this country with the brightest minds choosing more lucrative fields.

The forensic departments in medical colleges exist due to requirements laid down by the Pakistan Medical and Dental Council, the governing body for undergraduate medical education in Pakistan.

While the subject is taught in all medical colleges as a compulsory course, it is treated by students as no more than a necessary irritant to be endured, rather than a discipline to be learnt and understood, since very few people want to make a career out of it.

Read next: Women doctors don’t choose to leave work; they are forced out of their careers

This is not surprising since the only employment that forensic specialists get in Pakistan are in understaffed, under budgeted police surgeon offices in casualty departments of government hospitals.

The medicolegal officers are the underpaid, unrespected and entirely unacknowledged foot soldiers of our medicolegal system that is known more for its failings rather than its accomplishments.

The necessary close linkage with the law enforcement system also exposes this cadre to corruption that is rife in our police force.

Hence we have very few people in this field, out of whom many are there due to a lack of alternatives rather than out of choice.

This dismal state of affairs translates into limited progress in the field, the result of which is the suffering endured by the hapless victims seeking justice.

A prime example of this was highlighted by a recent Dawn articlelamenting the use of the archaic and useless two-finger test used to establish ‘consent’ in a sexual assault case.

This legal requirement for a two-finger test to determine the veracity of the complaint of a rape victim resides within the dusty archives of law books, as a relic of the medieval precedence on which British law of that time was often structured, and is not in practice in any modern legal system across the world.

Yet, the legal and judicial system of this country seeks the results of this humiliating and unnecessary examination, to be conducted on a victim who summons enough courage to seek justice from a system not renowned for its sensitivity.

Not only is this test regarded as scientifically invalid, it does nothing but to doubly curse the woman.

After getting brutally violated once by the perpetrator of the crime, her recourse for justice lies in submitting to what amounts to nothing less than the most dehumanising and humiliating invasion of a woman’s privacy.

And this is done at the hands of a medical practitioner, a messiah whose hands are supposed to heal.

The Dawn editorial rightly applauds the Peshawar High Court’s decision to make it mandatory to include DNA evidence in rape investigations.

Whereas DNA forensic has been an established field across the world for years, enabling accurate linking of cells found at the site of the crime to the person they belong to, this technology has been introduced in Pakistan primarily to deal with cases of terrorism and has been very useful in identifying both victims and perpetrators.

Public sector hospitals can access these specialised labs to investigate rape investigations. However, the presence of a facility does not mean it will be used optimally.

Even though specimen collection using rape kits is no rocket science, and any trained person can do so, the lack of availability of trained staff often results in the loss of the window of opportunity to collect appropriate samples.

Due to the social taboo associated with rape and the psychological trauma, the victims may understandably present themselves to the investigation officer late.

Once this narrow window of opportunity is lost, there will be no second chance at collecting appropriate DNA samples.

Read next: How Pakistan can save more lives at the site of bomb blasts

Even if the samples are collected and preserved within the designated time frame, lack of appropriate transportation to the labs presents another challenge.

The samples sitting on the dashboard of a van on a hot summer afternoon, while the driver stops for lunch and namaz on the way from Karachi to Hyderabad, where the DNA lab is located for the province of Sindh, is not the recommended way to handle these delicate specimens.

Another challenge is the costs involved in the examination. While the service lies within the public sector domain, there is a cost attached to every procedure.

The lack of budgetary allocations precludes free availability of this investigation.

While the test ought to be provided for free to the victims, the cost which typically amounts to Rs20,000 is generally passed on to the victims’ families.

This may serve as a further deterrent for low income families who may still want to seek justice but find themselves in a bind because of their economic situation.

With so little faith in the legal system, many may understandably choose to forgo this added expense.

Perhaps even worse than ignorance and poor training is apathy of those who matter: the medical practitioners.

While our medical system may train our students in the modern methods of medical care, there is hardly any attempt to inculcate within them the values of empathy, compassion and caring, all part of the largely ignored multidimensional field of bioethics.

Our students are not trained in communication skills, which form an essential part of a physicians’ work, particularly for a medicolegal officer who deals with highly sensitive cases including rape and attempted suicide, to mention a few.

Most of our medical colleges either entirely ignore teaching bioethics, and even when it is included in the curriculum, according to a study conducted by one of the authors, the students believed that there was a disconnect between what was being taught and what they experienced in real life.

Another study has also previously indicated that a vast majority of the medical students expressed concern that instead of strengthening their moral values during medical schooling, the realities of the work environment may actually lead to erosion of their preexisting values.

In such a situation, easy availability and accessibility of advanced investigational techniques may not be enough.

Dealing with rape victims requires compassionate practitioners, equipped not only with advanced forensic knowledge and skills, and access to technology, but also armed with appropriate bioethics training with a focus on enhancing professionalism and communication skills.

A humane and ethical professional will make the best use of whatever technology is available and will provide the victim with the best chance at justice.