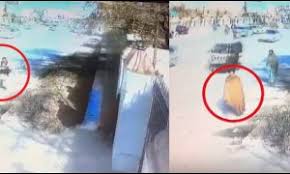 QUETTA: CCTV footage of Quetta’s terrorist attack shows the gatekeeper and security personnel at Bethel Memorial Church putting up immense resistance to the terrorists at the church’s entrance.

In the footage, it could be seen two suicide bombers were trying to storm the church and the gateman was barring their entry into the premises.

In second footage of the incident emerged lately, one of the suicide bombers could be seen jumping over walls of the church premises and opening gate for his accomplice.

Springing into action, a security guard shot one of the bombers on the premises.

Talking to media on Sunday, Balochistan Inspector General (IG) Moazzam Ansari said there were around 400 people present in the church at the time of the attack but a tragedy was thwarted owing to a timely action by security personnel.

“The quick response by security personnel prevented a major tragedy,” he told media persons while briefing about the incident.

According to officials, DNA samples of the slain terrorists have been obtained for identifications. An FIR of the incident has also been registered against unidentified terrorists.

Islamic State (IS) group has claimed the responsibility of the suicide bomb attack on Quetta church, reported international news agency

Home Minister Balochistan Sarfaraz said as per initial reports two suicide attackers stormed the church when Sunday service was ongoing, one of them detonated his charge inside the church while the other was shot dead by security personnel at the entrance to the church.