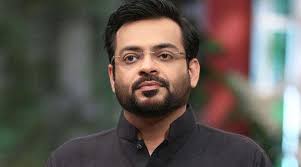 ISLAMABAD: The Islamabad High Court (IHC) on Wednesday imposed a ban on a television host Amir Liaquat Hussain for two weeks till the next date of hearing and ordered the Pakistan Telecommunication Authority (PTA) that no material from the anchor or on his behalf, connected to court order, be made viral on social media in any form.
Justice Shaukat Aziz Siddiqui banned the TV host till the next date of hearing while hearing a petition requesting the court that he be banned for lifetime on all media, including electronic media and social media.
During the hearing, Justice Siddiqui observed that a person is defiling moral values because certain powerful institutions were backing him. He issued decrees of kufr and declared persons liable to be killed, but no one questioned him. Who gave him the right to put allegations against everyone, including Mir Shakil-ur-Rahman? the IHC judge added.
Muhammad Abbas, through his counsel Shoaib Razzaq, approached the IHC seeking action against the host, appearing in any manner, including but not limited to, as a guest, analyst, reporter, actor, in audio, video, beeper, promo or advertisement in any electronic media.
Razzaq has prayed to the court to declare that the host has committed gross violation of Code of Conduct 2015, and Pemra Ordinance 2002. He has requested the court to declare that Amir used religion as a sword and shield at the same time to further his own gain at the cost of the safety and well-being of various individuals by conducting repeated hate speech amounting to incitement to violence due to which people have been killed while others receive death threats.
In his arguments, Razzaq said that the said anchor by crossing all limits of decency, morality, norms of decency and teachings of Quran and Sunnah has become a stinking symbol for Pakistan as he purposely raised such issues, which are not disputed in any manner but resulted into spreading hatred against the citizens and Muslims, in particular. He added that Amir while mocking, ridiculing and leveling serious allegations against people used religion as a weapon to harm them and a shield at the same time to protect himself. It is unfortunate that the noble profession of journalism is being destroyed every single day, by the indecent and unacceptable attitude of the said anchor, he stated.
Razzaq said that Amir has mastered hate speech and casting serious and life-threatening allegations on various individuals, declaring them“kafir” and “ghaddar” while endangering their lives by repeatedly declaring that various individuals have committed the heinous crime of blasphemy concerning Prophet Muhammad (PBUH) and Ahle-Bait.
He added that Amir is“mentally unfit and a liar” and uses social media for his unethical and illegal activities.
Following the arguments, Justice Siddiqui directed the respondents to submit a report and para-wise comments within a fortnight and issued a notice to Amir for his representation. The court also ordered that the PTA shall also ensure that no material from Amir or on his behalf, connected to court order, be made viral on social media in any form. In addition, Pemra and PTA have been directed to take immediate steps to implement the instant order.
Meanwhile, on the order of the Islamabad High Court (IHC), Pakistan Electronic Media Regulatory Authority (Pemra) has issued a directive to all the private satellite TV channels and all FM Radio broadcast stations prohibiting the appearance of Aamir Liaquat Hussain from all satellite TV channels and all FM radios, in any capacity.
Pemra licensees have been directed that Aamir Liaquat Hussain would not appear in any talk shows, news, current affairs programmes, shows, play, promos, audio/videos, beepers and advertisements with immediate effect till next date of hearing which is January 10, 2018. In case of any violation, Pemra shall proceed against the channel (s) or programme(s) under Pemra Ordinance 2002, to comply with the orders of the Islamabad High Court, says a Pemra statement issued here. The PTA has also issued directives to ban the anchor’s activities on social media.