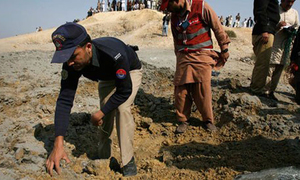 Two Frontier Corps (FC) officials lost their lives while three others were injured on Wednesday in a landmine explosion in Balochistan’s Sibbi district.

According to security officials, an FC team was on a routine sweep in Sangan area of Sibbi when a landmine went off close to its vehicle.

The three officials injured as a result of the explosion were shifted to Sibbi Hospital and are undergoing treatment.

Heavy contingents of police, FC and Levies forces reached the area and cordoned it off to conduct a security operation there.

In a recent spate of terrorism in Balochistan, two senior police officials have been killed in Quetta during the ongoing month.

On Nov 9, DIG Telecommunication Hamid Shakeel was killed along with two policemen in a suicide attack in Chaman Housing Scheme.