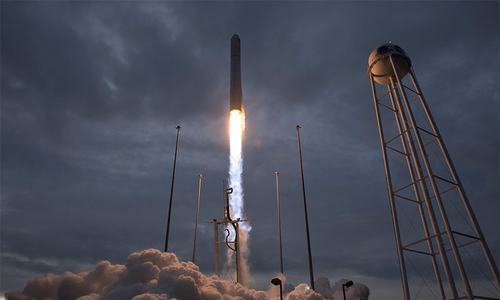 WASHINGTON: An unmanned cargo ship packed with 7,400 pounds (3,350 kilograms) of food and supplies for the astronauts living at the International Space Station blasted off Sunday from Wallops Island, Virginia.

Orbital ATK’s barrel-shaped Cygnus cargo ship launched atop an Antares rocket at 7:19am, a day after a last-second delay due to an unexpected aircraft in the area.

“Five, four, three, two, one and we have ignition,” said Orbital ATK’s mission control operator, as the rocket’s engines lit up the chilly, gray morning and cheers erupted from spectators near the launch site. The spacecraft reached orbit about nine minutes later.

Nasa commentator Rob Navias described the launch as “flawless.” The mission is the eighth for Orbital ATK, which has a $1.9 billion contract with Nasa to resupply the orbiting outpost.

SpaceX also has a $1.6 billion contract with Nasa, sending its Dragon cargo ship to regularly re-stock the space lab.

Among the experiments on board is a satellite that will test how bacteria grows in microgravity, and determine the minimum amount of antibiotic needed to stop its growth.

Knowing how bugs will act during long-duration missions will help the US space agency, which hopes to send people to deep space in the coming decades, with a human mission to Mars sometime in the 2030s. Cygnus is scheduled to arrive at the orbiting outpost on Tuesday.

Srinagar, October 01 : In India illegally occupied Jammu and Kashmir, Indian troops in their unabated acts of state terrorism martyred seventeen (17) Kashmiris in the last month of September. According to the data issued by the Research Section of Kashmir Media Service, today, of those martyred ten (10) Kashmiris were killed in fake encounters. … END_OF_DOCUMENT_TOKEN_TO_BE_REPLACED

Laal Singh Chaddha is the latest film to face targeted attacks from anti-Muslim, Hindu-nationalist trolls who some claim are beginning to impact box office performance In August this year, a week after the release of Laal Singh Chaddha, Bollywood’s adaptation of Forrest Gump, a Twitter account with about 280,000 followers, tweeted: ​​“#Urduwood is trending. Thanks to … END_OF_DOCUMENT_TOKEN_TO_BE_REPLACED

KARACHI: Foreign Minister Bilawal Bhutto-Zardari said on Thursday that Islamabad had so far not requested a restructuring, deferment or swap of debt owed to China in the wake of the catastrophic floods that hit the country. Insisting that whenever such a conversation takes place, it would be on Pakis­tan’s own terms, he said that he … END_OF_DOCUMENT_TOKEN_TO_BE_REPLACED No ‘debt swap’ talks with Beijing yet, says Bilawal →