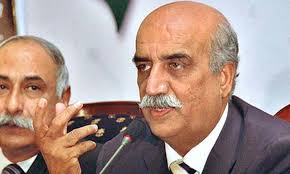 SUKKUR: Opposition Leader in National Assembly Khurshid Shah said that the government should give briefing to Chief of Army Staff (COAS) General Qamar Javed Bajwa on prevailing economic situation of the country to remove his reservations.

Talking to media, Khursheed Shah said that everyone, from a common man to the army chief, has the right to comment on economy taking an opposite position to the interior minister’s statement that the Director General Inter-Services Public Relations (ISPR) should refrain from commenting on the country’s economy.

Khurshid Shah said that there is nothing wrong with the army chief commenting on the state of the economy since he was the “commander-in-chief” of the army. A weakened economy means a weakened army, he said.

Commenting on the scuffle outside accountability court ahead of indictment proceedings against Sharifs, Shah said that the incident “should open the eyes of every Pakistani as to where we going as a nation”. He added that the Pakistan Peoples Party is working to ensure that the different institutions of the country are not at loggerheads, and advised Pakistan Muslim League-Nawaz and other politicians to do the same. He said clash between departments and state is dangerous for the country as weak institutions weaken the government as well.

Responding on Khatm-e-Naboowat issue, Shah advised the politicians to carefully handle the issue and referain from saying harsh words.

KARACHI: Foreign Minister Bilawal Bhutto-Zardari said on Thursday that Islamabad had so far not requested a restructuring, deferment or swap of debt owed to China in the wake of the catastrophic floods that hit the country. Insisting that whenever such a conversation takes place, it would be on Pakis­tan’s own terms, he said that he … END_OF_DOCUMENT_TOKEN_TO_BE_REPLACED No ‘debt swap’ talks with Beijing yet, says Bilawal →

The PKR was being traded at Rs229.5 per dollar at 11:30am after appreciating 1.12 percent from yesterday’s close of Rs232.12, data shared by the Forex Association of Pakistan (FAP) showed. Exchange Companies Association of Pakistan (Ecap) General Secretary Zafar Paracha said sentiments had changed mainly because of Ishaq Dar’s return as finance minister due to which the … END_OF_DOCUMENT_TOKEN_TO_BE_REPLACED PKR strengthens by Rs2.62 against dollar in interbank →

LONDON, Sept 28 (Reuters) – President Vladimir Putin’s latest warning that he is ready to use nuclear weapons to defend Russia amid the war in Ukraine has made a troubling question much more urgent: Is the former KGB spy bluffing? Putin cautioned it was no bluff, and Western politicians, diplomats and nuclear weapons experts are … END_OF_DOCUMENT_TOKEN_TO_BE_REPLACED