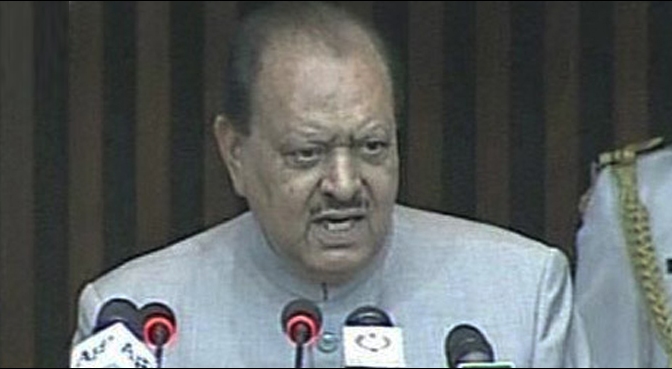 ISLAMABAD: President Mamnoon Hussain said on Friday that laws might be amended to tackle the recently surfaced “unprecedented” threats to national security. “Merging religion with extremism is wrong. We need to work together to counter this problem,” the president said while addressing a workshop at the National Defence University in Islamabad.

He observed that under the existing circumstances, the dynamics of national security had changed. “We have undergone rapid changes in the last three decades in terms of political, social and economic affairs,” state media quoted him as saying.

Some elements, he added, were misguiding the nation by disseminating a “negative” narrative. “We must collectively denounce this negative narrative,” he noted.

The president stressed the need for reforming both internal and external policies to address the issues faced by the country regionally and internationally. He further said continuous steps were need to make the National Action Plan more effective.

The PKR was being traded at Rs229.5 per dollar at 11:30am after appreciating 1.12 percent from yesterday’s close of Rs232.12, data shared by the Forex Association of Pakistan (FAP) showed. Exchange Companies Association of Pakistan (Ecap) General Secretary Zafar Paracha said sentiments had changed mainly because of Ishaq Dar’s return as finance minister due to which the … END_OF_DOCUMENT_TOKEN_TO_BE_REPLACED PKR strengthens by Rs2.62 against dollar in interbank →

LONDON, Sept 28 (Reuters) – President Vladimir Putin’s latest warning that he is ready to use nuclear weapons to defend Russia amid the war in Ukraine has made a troubling question much more urgent: Is the former KGB spy bluffing? Putin cautioned it was no bluff, and Western politicians, diplomats and nuclear weapons experts are … END_OF_DOCUMENT_TOKEN_TO_BE_REPLACED

NEW DELHI, Sept 28 (Reuters) – India declared the Popular Front of India (PFI) Islamic group and its affiliates unlawful on Wednesday, accusing them of involvement in “terrorism” and banning them for five years, after authorities detained more than 100 PFI members this month. The PFI did not immediately respond to an email seeking comment … END_OF_DOCUMENT_TOKEN_TO_BE_REPLACED