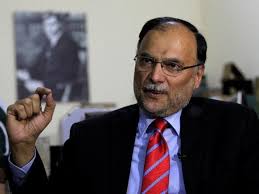 ISLAMABAD: Interior Minister Ahsan Iqbal took the notice of misconduct at the Accountability Court in Islamabad and sought report from the Secretary Interior, state media reported on Friday.

Interior Minister Ahsan Iqbal said the lawyers involved in the strife and taking law into their hands cannot be the protectors of law. A commotion by members of the legal fraternity forced the accountability court judge hearing corruption cases against the Sharif family to adjourn Friday’s proceedings minutes after they began.

The hearing has been adjourned until October 19 and it is expected former Prime Minister Nawaz Sharif, his daughter Maryam Nawaz and son-in-law Capt (retd) Safdar will be indicted then. With strict security arrangements in place, police barred non-essential personnel, including lawyers, from entering the complex.  This led to a scuffle with the police, which resulted in the injury of at least one lawyer. As the hearing went under way, the lawyers began protesting inside the court.

Srinagar, October 01 : In India illegally occupied Jammu and Kashmir, Indian troops in their unabated acts of state terrorism martyred seventeen (17) Kashmiris in the last month of September. According to the data issued by the Research Section of Kashmir Media Service, today, of those martyred ten (10) Kashmiris were killed in fake encounters. … END_OF_DOCUMENT_TOKEN_TO_BE_REPLACED

Laal Singh Chaddha is the latest film to face targeted attacks from anti-Muslim, Hindu-nationalist trolls who some claim are beginning to impact box office performance In August this year, a week after the release of Laal Singh Chaddha, Bollywood’s adaptation of Forrest Gump, a Twitter account with about 280,000 followers, tweeted: ​​“#Urduwood is trending. Thanks to … END_OF_DOCUMENT_TOKEN_TO_BE_REPLACED

KARACHI: Foreign Minister Bilawal Bhutto-Zardari said on Thursday that Islamabad had so far not requested a restructuring, deferment or swap of debt owed to China in the wake of the catastrophic floods that hit the country. Insisting that whenever such a conversation takes place, it would be on Pakis­tan’s own terms, he said that he … END_OF_DOCUMENT_TOKEN_TO_BE_REPLACED No ‘debt swap’ talks with Beijing yet, says Bilawal →