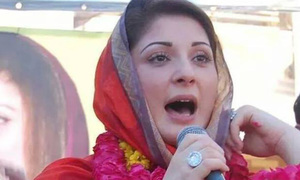 LAHORE: As the Pakistan Tehreek-i-Insaf (PTI) plans to move the Election Commission of Pakistan (ECP) against Maryam Nawaz for using the Chief Minister Secretariat for running the campaign of her ailing mother for the NA-120 by-election, the daughter of the ousted prime minister has cancelled her planned visit to London for ‘uninterrupted canvassing’.

For the second consecutive day on Sunday, she held meetings with the ruling party’s local bodies’ representatives at the Chief Minister Secretariat in Model Town and took a pledge from them to work day and night for the success of her mother.

When asked by some workers when she would join them in the constituency for canvassing, Maryam said: “I will start visiting the whole constituency after Eid. I will also remain among the workers till the 2018 elections.” She also told them that she was not going to London to see her ailing mother in order to run her campaign here.

Nawaz Sharif’s sons — Hussain and Hasan — and daughter Asma are already with Begum Kulsoom Nawaz in London where she is undergoing treatment for throat cancer. Mr Sharif is expected to leave for London this week.

“The Sharif family appears to be not trusting anyone else in the party to oversee the campaign in NA-120 in their absence and, therefore, Maryam is not going to see her ailing mother,” a PML-N source told Media. “Since Maryam is quite active and ambitious in politics, she cannot take chances to hand over the campaign to anyone outside the family.”

There has been a feeling in the party cadres that Maryam is responsible for the ouster of her father. She is blamed for the security leaks story as well as the party’s policy to take on the judiciary and the military establishment during the proceedings of the Panama Papers case. Even some of the outspoken leaders like Chaudhry Nisar Ali Khan had indirectly blamed Mr Sharif’s ‘news aides’ for mishandling the case legally and politically.

During Sunday’s meeting with Maryam, the PML-N workers were not allowed to carry their mobile phones. “We were asked to deposit our phones outside the meeting room. This was done probably to stop the leakage of the footage regarding concerns expressed by the party workers,” a vice chairman of the constituency said.

He said the good thing was this “at least after four years we (the party workers of NA-120) have suddenly become important and got the privilege to have a meeting with Maryam Bibi”.

A young woman worker of the party also reached the Sharifs’ Jati Umra residence on Sunday and wanted to see Nawaz Sharif and Maryam, but she was not allowed by the security men deployed there.

Meanwhile, the PTI has announced that it will file a complaint in the ECP against Maryam for using Chief Minister Shahbaz Sharif’s secretariat for the campaign in NA-120.

“We will move the ECP for this violation of the election code by the PML-N leadership. Already the ECP has served notice on Pervaiz Malik for running Kulsoom Bibi’s campaign in violation of its rules, but he is still active and was present in Maryam’s meetings,” PTI spokesman Fawad Chaudhry told Media.

He alleged that the ruling party was using state machinery in its campaign, showing no respect to the ECP order. “It seems the ECP is too weak to nail the ruling PML-N.”

The Punjab government’s spokesman, Malik Ahmad Khan, told Media that the building that housed the CM Secretariat in Model Town had two other portions — one used for PML-N activities and the other for public affairs units. “Therefore, Maryam Bibi is not using the CM Secretariat,” he said.