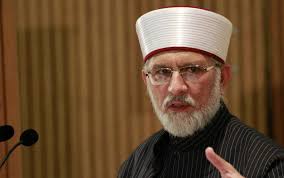 MANCHESTER: In another controversial statement, Pakistan Awami Tehreek (PAT) chief Dr Tahirul Qadri has said Pakistan Army has eradicated 90 percent of terrorism from the country, but the remaining 10 pc could not be wiped out because of the Sharif brothers opposing military operation in Punjab province.

While addressing a press conference, the cleric alleged that Sharif brothers creating hurdles in counter terrorism operation in Punjab.

The PAT chief said corrupt elites opposed military operation in Punjab province where terror safe havens and nurseries which produce suicide bombers existed. That is why terrorism could not be wiped out completely, he added. Referring to US President Donald Trump’s warning to cut off all military aid to Pakistan, he said if the US stopped helping Pakistan fight terrorism, it should be deemed as a blessing for it. Commenting on former Prime Minister Nawaz Sharif’s disqualification, Qadri said the Supreme Court decided the Panamagate case against Sharif according to the constitution. Instead of accepting the verdict, Sharif was bringing honorable institutions into disrepute, he added.