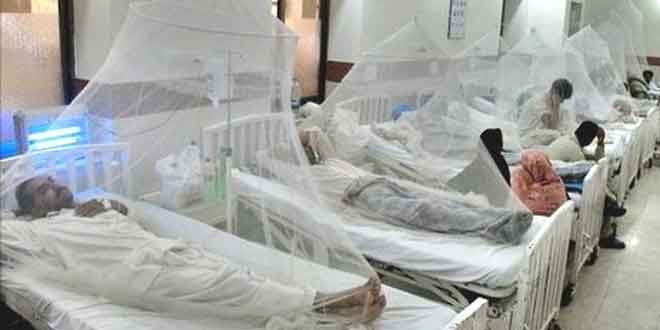 Dengue virus has claimed the life of one more victim in Peshawar on Saturday, raising the death toll to eight.

According to details, the victim was being treated at the Khyber Teaching Hospital in the provincial capital.
The outbreak continues to wreak havoc in Peshawar as 69 new cases surfaced in the city on Thursday.
According to the Punjab government’s spokesman, the medical teams working in Peshawar had treated 2,062 patients and screened 595 individuals as of Tuesday. Out of 595, 175 people were diagnosed with dengue.
Earlier, the KP Health Department had sought assistance from the provincial education department in containing the dengue outbreak.
In a letter written to the education department, the health authorities emphasised the need for raising awareness in students about the mosquito-borne virus.
The education officials were instructed to advise students to wear full sleeves and use mosquito repellent ointments. Moreover, administrations of educational institutes were directed to modify the morning assembly timings as the dengue mosquito strikes in that time period.
The administrations have also been directed to halt all construction activities till the outbreak is over, arrange regular awareness sessions with students and teachers, and ensure no container is left with standing water where mosquitoes could breed.
As many as three doctors would be available 24/7 to give service to dengue patients on helpline established at Provincial Disaster Management Authority, a notification issued by KP Health Department had said.

Former United States President George W. Bush mistakenly described the invasion of Iraq as “brutal” and “unjustified” before correcting himself to say he meant to refer to Russia’s invasion of Ukraine. Bush made the comments in a speech during an event in Dallas on Wednesday, while he was criticising Russia’s political system. “The result is … END_OF_DOCUMENT_TOKEN_TO_BE_REPLACED

Reuters: More than 500,000 people have fled their homes in India’s northeastern state of Assam to escape heavy floods triggered by pre-monsoon rains that drowned seven, authorities said on Wednesday, as they warned the situation could worsen. One of the world’s largest rivers, the Brahmaputra, which flows into India and neighbouring Bangladesh from Tibet, burst … END_OF_DOCUMENT_TOKEN_TO_BE_REPLACED

The government began talks with the International Monetary Fund (IMF) on Wednesday over the release of crucial funds, a process slowed by concerns about the pace of economic reforms in the country. Pakistan has repeatedly sought international support for its economy, which has been hit by crippling national debt, galloping inflation and a plummeting rupee. … END_OF_DOCUMENT_TOKEN_TO_BE_REPLACED