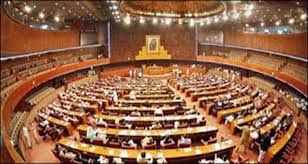 ISLAMABAD: Pakistan Tehreek-e-Insaf (PTI) on Wednesday submitted an adjournment motion in the National Assembly over US President Trump’s threat to Pakistan.

The adjournment motion was signed by PTI MNAs Arif Alvi, Shah Mahmood Quraishi, Asad Umar, Shafqat Mahmood and Shireen Mazari and others. The motion submitted in the National Assembly secretariat sought debate on the US President threats to Pakistan by the House while suspending the routine agenda.

The motions states the routine proceeding of the house be adjourned and a debate be held over the speech of Trump wherein he threatened Pakistan of dire consequences. It said that Pakistan had rendered unmatched sacrifices than any other nation of the world.

Earlier, President Donald Trump warned Pakistan that Washington will no longer tolerate Pakistan offering “safe havens” to extremists. Trump said “We can no longer be silent about Pakistan s safe havens for terrorist organizations,” Trump declared, outlining a new US security strategy in South Asia. “Pakistan has much to gain from partnering with our effort in Afghanistan. It has much to lose by continuing to harbor criminals and terrorists.”

RAWALPINDI: With another spell of snowfall predicted in Murree, a comprehensive plan has been chalked out by traffic police for the convenience of those whose access to the hill station had been restricted, following the tragic death of 22 tourists in a blizzard last week. Drivers with valid licenses will be allowed to travel to … END_OF_DOCUMENT_TOKEN_TO_BE_REPLACED

NEW DELHI: Indian media bodies have deplored the forcible takeover of the Kashmir Press Club in Srinagar by a group of journalists who raided the precincts on Saturday under the watch of armed police — a month before fresh elections are due to be held there on Feb 15. The takeover, described by media spokespersons … END_OF_DOCUMENT_TOKEN_TO_BE_REPLACED

PARIS, Jan 13 (Reuters) – Tens of thousands of French teachers angry with the government’s COVID-19 rules walked off the job on Thursday and took to the streets to demand better protection for pupils and staff against infection. “Stop your contempt,” and “We’re fed up with tests” teachers proclaimed on banners in rallies across France, … END_OF_DOCUMENT_TOKEN_TO_BE_REPLACED