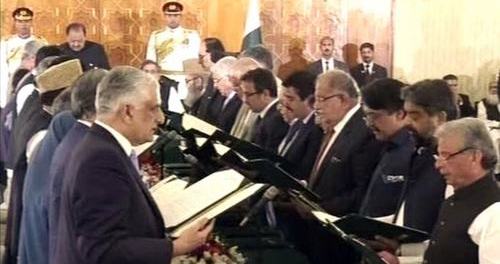 Members of the new federal cabinet took oath at a ceremony organised at the Presidency in Islamabad on Friday morning.

The names of the cabinet members and their portfolios were finalised by PM Abbasi after six-hour-long consultations with his predecessor Nawaz Sharif and Punjab Chief Minister Shahbaz Sharif in Murree on Thursday.

Ishaq Dar will continue as finance minister whereas Pervez Malik will be the new minister for commerce in place of Khurram Dastagir Khan, who will take charge of the defence ministry.

Saad Rafique will retain his post as minister of railways.

Daniyal Aziz from Narowal, Talal Chaudhry from Faisalabad, Arshad Leghari from Rahim Yar Khan and Junaid Anwar Chaudhry from Toba Tek Singh are said to be among the newcomers in the cabinet.

Marriyum Aurangzeb, Zahid Hamid and Dr Tariq Fazal Chaudhry are expected to retain their previous portfolios. Hamid was law minister and Aurangzeb minister of state for information in the previous cabinet of the ousted prime minister Nawaz Sharif. She had replaced Pervez Rashid. Tariq Fazal was in charge of the Capital Administration and Development Division.

PMl-N’s information secretary Mushahidullah Khan returned to the cabinet as minister of climate change. He had been expelled by Sharif for issuing a controversial statement accusing the ISI of sponsoring the Pakistan Tehreek-Insaf’s sit-in in 2014.

The PML-N had been deliberating over membership of the new cabinet over the past few days, as well as its contender for the upcoming NA-120 by-poll for the seat left vacant by ousted prime minister Nawaz Sharif.

The federal cabinet was dissolved after Sharif stepped down following a landmark Supreme Court ruling on the Panama Papers case.

The court in its July 28 verdict concluded that Sharif had been ‘dishonest’ by not declaring in his nomination papers for the 2013 General Election ─ as required under Section 12(2)(f) of the Representation of the People Act (ROPA), 1976 ─ a salary of 10,000 dirhams receivable as chairman of the board of Dubai-based company Capital FZE owned by his son Hassan Nawaz.

Following the prime minister’s ouster, PML-N leader Shahid Khaqan Abbasi was nominated as the party’s choice for interim prime minister. He was elected premier by MNAs on Tuesday, and took oath on the same day.

Abbasi, in his maiden speech to the National Assembly following his election, put forward his vision to improve the socio-economic conditions and security situation in the country, showing that he has some personal ambitions apart from PML-N guidelines.