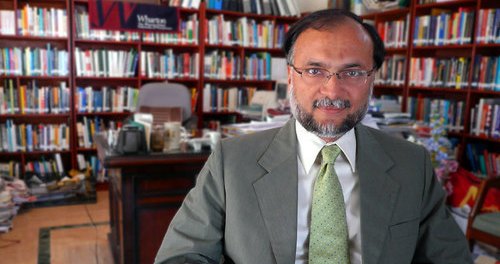 ISLAMABAD: After Panamagate, another scandal has surfaced as one more member of the federal cabinet, Ahsan Iqbal, who oversees the $54 billion China-Pakistan Economic Corridor (CPEC) project, is found to be a holder of Iqama (work permit) of Saudi Arabia.

He is said to be the fourth cabinet member to have held a foreign work permit, the others being Prime Minister Nawaz Sharif, Defence Minister Khawaja Asif and Finance Minister Ishaq Dar — holders of Iqama of the United Arab Emirates (UAE).

According to media reports, Ahsan Iqbal, Minister for Planning and Development, obtained Iqama from a Madina-based firm.

However, according to the media reports, he has confirmed that he held the kingdom’s work/residence permit for two years.

PTI decides to bring all Iqama-holder cabinet members to court

“I worked in Madina Munawarah 2004-06 afterwards retained Iqama without receiving any compensation for frequent travel hence no illegal act,” he said in a Twitter message.

In a statement issued on Wednesday, a spokesman for the planning and development ministry said Mr Iqbal had served as an adviser to the governor of Madina from 2004 to 2006 on a digital economy project.

It claimed that the minister had not taken any salary for the project since 2006, adding that he had declared his Iqama in his ‘documents’ in 2013.

The spokesman said Mr Iqbal was not doing business in any foreign country and after the expiry of his Iqama it was not renewed.

“Have you ever seen in democracy that a prime minister of a country serves as a sale manager after getting Iqama. Similarly, we heard that Defence Minister Khawaja has Iqama of another Gulf state,” the PTI chief said at a press conference on Wednesday.

Calling Mr Iqbal a ‘pseudo intellectual’ and ‘Aristotle of PML-N’, he said the minister also tried to hide his ‘corruption’ behind Islam that was why he got Iqama of Saudi Arabia.

Mr Khan said his party had decided to bring all Iqama-holder cabinet members to a court of law. “Our leaders Usman Dar and Firdous Ashiq Awan, who better know the background of Khawaja Asif, will soon file a petition against him,” he said.

PTI spokesman Fawad Chaudhry said: “It is sad that Nawaz Sharif, who is prime minister of Pakistan, is also serving as a marketing manager in the UAE. Khawaja Asif, who is our defence minister and handles all security forces of the country, is a Munshi (record keeper) of a UAE-based firm. Finance Minister Ishaq Dar, who runs the country’s finances, is also an employee of a firm in the UAE, and Ahsan Iqbal, who is the country’s planning minister and supervising CPEC, is a security guard of a Madina-based firm.

“After Panamagate, a new scandal of Iqamas has been unearthed and it is quite shameful for the nation that our rulers keep dual offices and are serving on petty positions in Arab states.”

The PTI spokesman said ruling Pakistan Muslim League-Nawaz (PML-N) leaders obtained work permits of foreign countries not to get jobs but to have an ‘escape way’ when they would not be in power and could be made accountable for their wrongdoings.