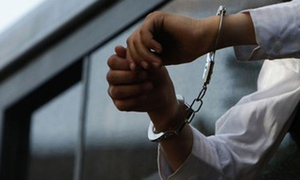 RAWALPINDI: A man suspected of shooting a traffic warden was arrested on Saturday as the critically injured is still struggling for his life in the ICU of a hospital.

Doctors at the Benazir Bhutto Hospital (BBH) described Sohail Shahzad’s condition as critical. The injured has not regained consciousness since he was operated upon after being shot by a motorcycle rider doing a wheelie on Murree Road on Thursday.

City Traffic Officer (CTO) Yousuf Shahid said the suspect was rounded up by the New Town police from People’s Colony. The suspect claimed that he fired gunshots into the air to get his friends released from the police.

The CTO identified the suspect as Junaid alias Jony and said during interrogation the suspect said he was wearing black shalwar kameez and riding a 70cc motorcycle when he fired gunshots near Sixth Road.

The CTO said the suspect had also been involved in mobile phone snatching.

The official said the traffic police had launched a crackdown against motorcycle riders doing wheelie risking their own lives as well as that of other citizens. So far, he added, 29 motorcyclists have been arrested besides impounding dozens of motorcycles modified for wheeling.

Special police squads have been constituted to check wheelie on Murree Road.

The CTO warned parents to keep a check on their sons, especially those using modified motorcycles.

RAWALPINDI: With another spell of snowfall predicted in Murree, a comprehensive plan has been chalked out by traffic police for the convenience of those whose access to the hill station had been restricted, following the tragic death of 22 tourists in a blizzard last week. Drivers with valid licenses will be allowed to travel to … END_OF_DOCUMENT_TOKEN_TO_BE_REPLACED

NEW DELHI: Indian media bodies have deplored the forcible takeover of the Kashmir Press Club in Srinagar by a group of journalists who raided the precincts on Saturday under the watch of armed police — a month before fresh elections are due to be held there on Feb 15. The takeover, described by media spokespersons … END_OF_DOCUMENT_TOKEN_TO_BE_REPLACED

PARIS, Jan 13 (Reuters) – Tens of thousands of French teachers angry with the government’s COVID-19 rules walked off the job on Thursday and took to the streets to demand better protection for pupils and staff against infection. “Stop your contempt,” and “We’re fed up with tests” teachers proclaimed on banners in rallies across France, … END_OF_DOCUMENT_TOKEN_TO_BE_REPLACED