TAXILA: Karmwal- a small village surrounded by mighty Margalla Hills East as well as Northern side and Tanks factory on Western side mostly comprising population with construction laborers   as well as low paid employees of local defense industries was not known to the people of the area until a five feet man raised in the area and formed his gang known as “Karamwali gang“comprising his two brothers, friends and some natives of same village with same mindset.

The in depth investigation of Media reveals that  26 years old Habib Khursheed joins the crime world first by thefts in nearby industrial units and then liquor manufacturing and selling but as soon as he arrested and landed behind bars found these jobs less beneficial and formed gang of robbery who never hesitate to shot straight to any who show resistance in their way.

According to Police record and data he was presently leading a six member gang comprising Saqlian alias Genda, Zaheer Akhter, Imran alias Mano, Babar as well as his brothers Tamoor Khursheed and Bilawal Khursheed as due to fearless spell of robbery incidents in which they looted cash, gold ornaments and other valuables over 40 million have become a symbol of terror in the area due to aggressive acts during the various robbery and dacoity cases.

On night between Saturday and Sunday when Habib was killed in shootout with Police he was wanted in as many as 26 heinous cases  in various cities including Taxila, Islamabad, Hattar, Khanpur, Hassanabdal, Fatehjang and Bhattar. “According to available Police record, first FIR registered against Habib was on 8 September 2010 while last on February 18 this year.” Said Maqbool Shah- a senior cop of the area. 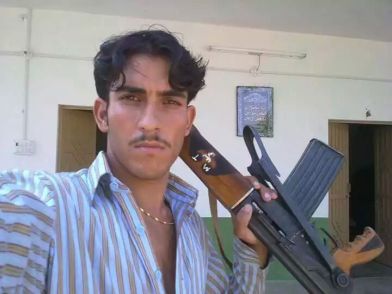 Presently as per available official Police record of various police stations of various provinces including federal capital, the gang led by Habib was wanted in as many as 26 cases including murder, attempt murder and injuring victims during the robberies and dacoities incidents.” Said Inspector Yasir Matloob Kiyani – the station house officer of Wah Saddar Police station while talking to this reporter. He said that as per available record as many as 13 cases are being under trial at various courts against Habib while on 5 cases he was declared proclaimed offender (PO) while in 8 cases his arrest being pending. About the  scale of looting spree of the gang, Mr Kiyani said that in Taxila 11 FIRs registered against the gang, 4 in Tarnol, 3 each in Hattar and Hassanabdal, 2 each in Bhattar and Khanpur while one in FatehJang. Inspector Rana Kashif- station house officer of Fatehjang Police station has said that the gang was also involved in house robbery case in which they looted cash, gold ornaments and other valuables worth million of rupees.

Sub divisional Police officer Taxila circle DSP Sajid Gondal told this reporter that the gang due to its ruthless acts during robbery and dacoity cases spread a sense of fear and terror in the area. He said that gang during a robbery incident on December 28, 2012 in village Bhalasser in Hassanabdal Police station limits killed a man named Mohammad Iqbal and injured his son Mohammad Nazakat who resisted robbery. He said that the gang during a house robbery incident on Faisal Sahhed road on January 20, 2013 injured with house owner Manzoor Akhter- a government servant when he resisted.

He said that gang also barged in to an explosive gowdown in Margalla Hills in year 2011 in which they took away 1600 kilogram dynamite, 30300 detonators, 21500 meters safety fuses worth Rs 1476000 which later Police recovered from the gang. He said that Police also recovered a Klashankivo from Habib in year 2013.

He said that in their last crime, the gang strike at Fish Market located near GT road in limits of Hassanabdal Police station on February 18 and looted two fish traders and fled successfully with looted booty worth Rs 0.3 million. Mr Gondal said that the gang was assembled in Muneerabad area on this Saturday night the gang equipped with different weapons were planning to strike at their target when they were spotted by some persons who informed Police and a team raided there and in a bid to escape arrest they opened indiscriminate firing at Police party resultantly Habib was hit by his own gang members fire and died on the spot- which led to end to long trail of crime as well as fear and terror. Mr Gondal was of the view that with the killing of ring leader- the “Karamwali gang“ would unable to continue its activities and ratio of crime would not only be reduced but residents would also get a sigh of relief.