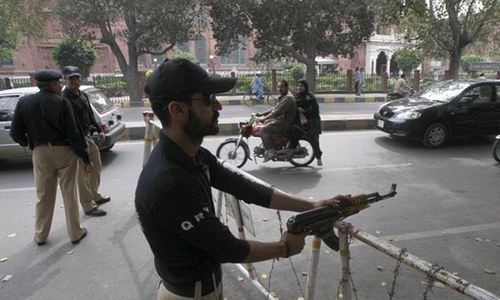 The Counter-Terrorism Department (CTD) of Punjab police raided a militant hideout and killed six suspected members of the proscribed Jamaat-ul-Ahrar (JA), the group that has launched a new campaign of violence in the country, police said on Thursday.

CTD said its officers surrounded a hideout of the JA, a breakaway faction of the banned Tehreek-i-Taliban Pakistan (TTP) in Multan late on Wednesday and ordered the suspects inside to surrender.

“But the terrorists started firing at the raiding party and threw explosives,” a spokesman for the department, who the unit does not identify for security reasons, said in a statement.

Police acted after getting information that the militants were planning to launch attacks on “vital installations” and the government in the area.

The militant faction claimed responsibility for a suicide bomb attack near the Punjab Assembly in Lahore on Monday that killed 14 people and wounded more than 80.

Since then, militants have killed two bomb-disposal officers in the Quetta and a suicide bomber blew himself up outside a government office in Mohmand Agency on Wednesday, killing five people.

Also on Wednesday, a suicide bomber on a motor bike attacked a group of judges in a van in Peshawar, killing their driver.

The attacks have underlined the threat militants pose to the government, despite an army offensive launched in 2014 to push them out of their strongholds near the Afghan border.

Pakistan’s foreign office said it had summoned Syed Abdul Nasir Yousafi, deputy head of mission at Afghanistan’s embassy in Islamabad, on Wednesday to voice concern about JA “sanctuaries” in Afghanistan.

Pakistan says militants launch attacks from the Afghan side of the border.

“Afghanistan was urged to take urgent measures to eliminate the terrorists and their sanctuaries, financiers and handlers,” the foreign office said in a statement.

ISLAMABAD: Following an uproar over the passage of controversial bills in the National Assembly, the Pakistan Tehreek-i-Insaf (PTI) on Tuesday appeared to extend an olive branch to the opposition, inviting it to sit down and discuss all matters of national importance. “We want to engage the opposition on important national issues like electoral and judicial reforms and … END_OF_DOCUMENT_TOKEN_TO_BE_REPLACED

PTA to be approached for blocking crypto portals

KARACHI: Federal Investigation Agency (FIA) Director-General Dr Sanaullah Abbasi on Saturday said the agency will approach the Pakistan Telecommunication Authority (PTA) for blocking websites dealing in cryptocurrencies to prevent fraud and possible money laundering. He was talking to the media after holding a meeting with a team of senior officials of the State Bank of … END_OF_DOCUMENT_TOKEN_TO_BE_REPLACED

Hindu monk jailed after calling for ‘genocide’ of Muslims